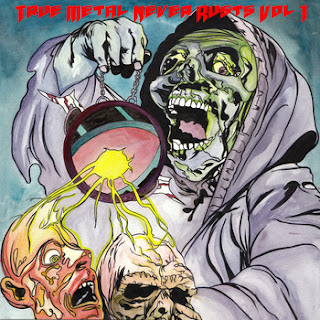 After having reviewed BORROWED TIME recently, I'm delighted to present you this compilation named "TRUE METAL NEVER RUSTS vol 1", which is available since the 1st seconds of 2012 via a "name your price" download on Bandcamp !
This is the first release of STEEL and FIRE records which is dedicated, as you've certainly guessed, to Traditionnal HEAVY Metal under almost all its possible forms... the content of the compilation exactly draws the wide variety of bands that should be implied in this promising label :  from NWOBHM likes to ferocious SPEED/THRASH while not forgetting POWER  and Epic HEAVY/DOOM METAL, all  bands here have an authentic 80's sound and proudly proclaim it !
This is the magic  realm (and nostalgic for most) of incisive guitars, amazing solos, melody + power and heaviness all mixed together, straight melodic singing (don't fear too  high pitched screams, there's almost none, ouf !)... Of course the 14 acts presented aren't all equal in quality, but there's more than just a few songs who really make you want to discover more about the bands (ain't that the main purpose of a compliation ?!!) ; I'm thinking of AIR RAID, SHALLOW GROUND, NEVERWORLD, STEEL AGGRESSOR, XPULSION, UNITY and of course STONE MAGNUM whose song "fallen priest" is undoubtly the best of the album (Dean's band is by far the closest to Trad Doom here, but there's a real  melodic and epic heavy 80's sound on this one)...
I know some of you have grown up (just like me) with compilations like "SPEED KILLS" and "METAL MASSACRE", but if most people just remember those names because SLAYER and METALLICA made their first steps there, one can also think that these compilations also featured some more obscure but still as memorable names like CIRITH UNGOL, WARLORD, NASTY SAVAGE, TROUBLE, HOLY TERROR, AGENT STEEL, MANILLA ROAD... and I'm convinced that this 1st chapter of "TRUE METAL NEVER RUSTS" also features such valorous bands that will leave a trace in the Metal of the 2010's (could it be influenced by the 80's or ... not !), so go now on Bandcamp and listen this, ok it's free but try to give a few dollars to help this young label starting and release as soon as possible great stuff of TRUE fucking METAL !!!