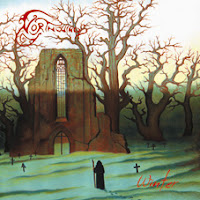 This cultish and very underrated band coming from Paris formed more than 20 years ago and already released 3 albums before this "Winter" came out six months ago on their historic partners label Black Widow rds from Italy, NORTHWINDS is one of the pioneers of DOOM in Europe and assuredly the oldest coming from France !

Despite the fact that the retro Proto-Doom wave brought dozens of bands (of various interest) over the recent past years, the style of NORTHWINDS remains very original and unique, I'd even say "more than ever" on this new 4th album, in the sense precisely that this is something visceral for them since such a long time and there's not a single second here where you can tell ya "shit this sounds like Blood Ceremony or The Devil's Blood"... (that would be more the contrary for the 1st named !)
Those french guys were already blending Doom and Progressive/Folk with flute and organ when 50% of the bands actually doing it were still  going at kindergarten or for the rest playing a completely opposite style of music !!!

Still turning around their major influences Black Sabbath, Ange and Witchfynder General, the creative dimension of NORTHWINDS matures from effort to effort. It's pretty hard to situate this album between the others, I would say this is not far a perfect mix of the progressive "The Great God Pan" and the more melodic "Chimeres" with a special enhancement towards cold creepiness.

While some classical DOOM dynamics are always delightfully displayed like on "Land of the Dead" and "Gorgon", a special attention seems to have been given to ATMOSPHERES on "The Last Chance" "Black Tower" (that flute's medieval touch mixed with this horror-like mood is just awesome) and the epic "Winter" a long masterpiece that transports you in some of the weirdest lands of mysteries your ears have ever been submited to.
That seems quite logical after all, considering the scenery of this concept album, but the way the band gets even stronger and more unpredictable when it comes to create dark and mournful moods puts you in a kind of isolated world full of  weird mysticism.

Once again, the production serves perfectly the organic sound of the band, spontaneous and authentic.
The album ends with a cover of "Clear Windowpane" from ST VITUS, a nice use with NORTHWINDS (Black Sabbath on 1st album, Ange and Witchfynder General on the 3rd) and a very personalized adaptation too.
NORTHWINDS definitely come back with strength and already announce that the 2nd part of this two concept albums will be called "Eternal Winter" which let presume that we won't have to wait 5 or 6 more years for new stuff, so coooool !

If your into 70's like DOOM and enjoy it mixed with strong Progressive/Folk tones this is then an ESSENTIAL purchase you should add on your Christmas-list urgently...