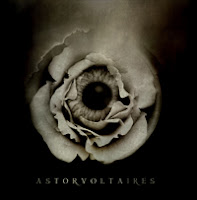 This is the second album by Chilean solo artist Juan Escobar, who has played in a lot of other bands, most prominently maybe Mar De Grises. What he does here on his own is rather close to the sound of that band, meaning that AstorVoltaires plays Doom Death with the almost mandatory nods towards early Katatonia and the likes, but embellishes it with really strong clean singing and a kind of songwriting that is sturdier than the usual assortment of ideas which are drawn out for their own sake

Opener „Rosas Y Fuego“ has a slightly epic quality once Juan starts to growl and churn out his slow riffs – a hint already to „Como Un Desierto“, which is by no means the sonic desert you might expect given the title: Juan sings in unison with a female and makes for some veritable hooks, a quality even more obvious during „Nexo Estelar“. As far as the man's talents for orchestration go, he effortlessly shifts from thick, heavy passages with effect-laden bass and synthesizer towards calm ones, taking away distortion in order to widen the dynamic range of his compostions.

„Aroma A Ti“ can be considered as a ballad without Gothic-kitsch and turns out to be the standout track on the album, while „Tummasilmäinen“ (Finnish for „dark-eyed“) and „Donde Nada Existia“ points toward Juan's Scandinavian influences once more, quite likely ranging from Opeth to cookie-cutters like Swallow The Sun. All in all, AstorVoltaires surpasses the average a few times on this record, mainly with the carefully built „Thy Endless Of Mourning's Heart“ (okay, I did not promise there'd be no kitsch at all …) and „Solo Un Sueño“, which features a string section and acoustic guitar.

The rest is either interludes or common genre-fare you don't do anything wrong with, but can surely do without in case you are looking for true ingenuity.