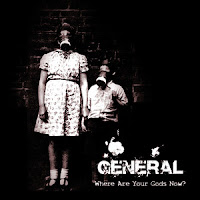 Coming from Coventry, here's GENERAL, one of UK's hottest new bands and "Where are your Gods Now" is their debut album freshly released on Catacomb Rds...
Recorded by Greg Chandler (Serpentcult, Moss, Alunah) and mastered by Billy Anderson (Acid King, Cathedral, Orange Goblin, Eyehategod), this quintet plays some very interesting Stoner/Heavy Rock that takes influences in Clutch, Kyuss, Monster Magnet and Orange Goblin (not just to cite a more local name...).
I would say that quite logically, especially considering this is a 1st album, you won't find in here many surprises but there's no boring songs at all and if heaviness, catchiness and tightness prevail like here, don't you think then that 95% of the job is done?!!! Towards those 3 major ingredients, there's a real sense of completion about this debut album and this gives also serious hopes for the future; there's so many many bands playing Stoner nowadays and too often so generic (is John Garcia the most clowned guy on earth ?) that it's yet almost a feat to be able to feel that GENERAL has a potencial that goes way beyond 99% of those bands !!!
The memorable vocals of Graham Stokes are as essential as the catchiness and massive 70's influenced guitar riffs; some doomy or sludgy elements can be introduced here and there, bringing haunting and dirtier hints to an identity that never sound too polished, even in the quieter moments.
I've a preference for three or four tracks that stand out like "Bullet Train", "Monkey City", "Make or Breakdown" but the overall is solid with a constant infusion of straight in your face and groovy riffage that believe me guarantees real good times of headbanging entertainement !!!