FAETHOM  formed initially in Bolivia by Mariela (voc/keyboards) and David (guit), but they soon left their country of origin to relocate in Fort Lauderdale (Florida), joined since then by Federico (bass), Hermes (drums) and very recently by Fabian (guit)...

Beyond the South American origins specific to each of the band's members, they all have a pronounced taste for : horror themes and blackened metal... Taking basically influences in early Morbid Angel, Ancient and Enslaved with little hints of mid 80's brazilian thrash, the music alternates between raging blackened malignant parts with raw deathed vocals, and some orchestral melodic moments with keyboards and incisive melodic guitars, that's where the influences of Mercyful Fate/King Diamond and even Candlemass ("by the lake of sacred eyes") amazingly appear to give a surprising technical  dimmension while a sinister atmosphere always prevail.
Ok, I've mentioned several references (good ones though) but that doesn't mean they're unoriginal at all, all the contrary in fact... Epic and theatrical with a ferocious evil touch, this is indeed pretty unique and refreshing with some very tight musicianship and a general mood (scary and haunting) perfectly in line with their concept. Mariela's vocal register is impressive,  always harmonious with a lot of deepness, could her singing be evil, menacing or melodically enchanting.
Their nice 5 songs ep entitled "Lullaby for Heathen Spawn" was self-released  late 2009 and after quite many awesome local shows, FAETHOM now announce that their debut concept album "In the Name of the Father, the Son, and the Unholy" will be out on November 1st, 2011 and this will contain no more than 16 tracks !!! The band invested a lot during two years to achieve something complete (both musically and on the concept)  and certainly worth discovering... The album should also reveal some great artwork and interesting lyrics, no doubt you'll hear more from them here in a short time ! 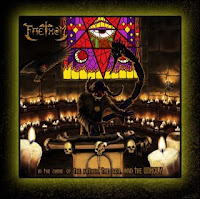 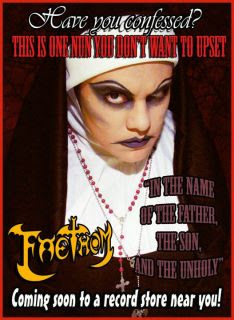 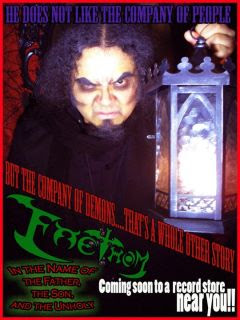