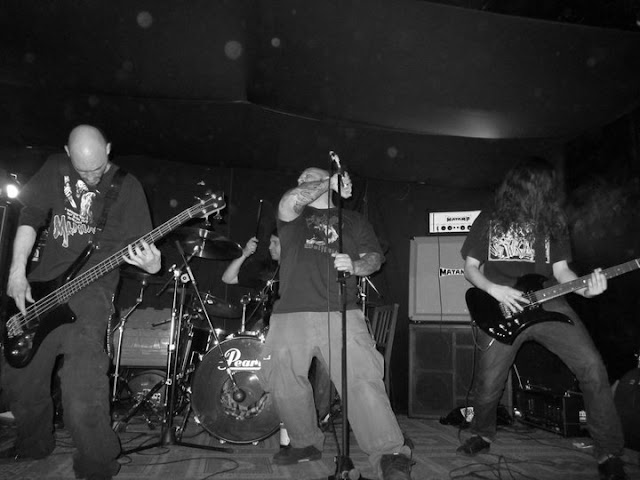 Does the new guitarist compose, bring new/different ideas ? Could you tell something about new songs ?
As I said previously, Guillaume has already wrote one new song and another one is on the way. Most of our new songs reflects the actual evolutions of the bands, meaning that every aspect of our music has been pushed further. The angry parts are lot more brutal and the melodic ones are more subtle. One of the new song that lenght 20mn is a perfect example of that as it includes nearly post-rock ethereal guitar lines and it finished by a wild Discharge-like sonic chaos.
Sadly you don’t play live that much, having to organize several gigs by yourselves in Paris and waiting for something serious elsewhere… this is the case of most French bands… in 20 years there has not been any real evolution !? How was your latest gig with Ramesses and Hooded Menace ?
We have played a pretty decent number of show in Paris, including a couple of them organised by us. It is true though that we have been more rarely seen far from our home base. There are several reasons for that. The main being time and money: in order to lower our fees per gig, we need to find several dates in a row which not a easy thing to do. This said, we will play at the Sludge Fest in Eindovhen on November 12th. The latest Gig with our good friends from Ramesses went fine. We missed a few dozen of people to break even but bands receive really positive feed-backs during and after the show.
15 years exactly after the split up, what’s your look on Astral Rising ? which are your best or most noticeable memories: the recording of “in quest” with Tim Buktu ? dates in Germany with Mirror Of Deception ? last gig in Dijon ? … ?
I do have quite clear recollections of all those events you mention. I would say that the most memorable is probably the recording of the Astral Rising’s album ‘In Quest’. This is the most professional recording session I’ve ever been involved so far. Tim has built his studio in his basement and we were staying in his house during the 15 days that last the recording. Therefore, we had no really pressure from the clock and Tim and his Guys did anything possible to make us feel comfortable and relax. That includes all kind of substance and beverage as well as a lot of good laugh! These are definitively good time memories.
Who do you think had the best potential between all your old bands (Cemetery, Garden Of Silence, Astral Rising, Weld, Horrors Of The Black Museum) ? Ridwan was really a brilliant vocalist, don’t you think that it’s a terrible shame that he couldn’t have been revealed in a largest way ?
I think that among all those project, GoS is the one I feel the most frustrated when I think about its potential. Guitarist Nicolas Vintejoux and Ridwan are really gifted musicians and I feel we could achieve greater things. At least an album and some gigs. This said, Eibon is the most full-filling project I have been involved, being on a artistic level and on the personal level. We have been knowing each for so long that it’s being a family without the wrong side of it.
So what did you think about the Roadburn fest ? (fave sets, ambiance, etc…) Could we expect EIBON to be on next year’s bill ?
This was my first Roadburn this year. I had read and heard a lot about and I had great expectation. As of the bands, the ones I was the most excited to see did really meet my expectations. Should it be Winter, Candlemass or Godflesh. I also enjoyed a lot the sets from Weedeater, Ramesses, Voivod & Winterfileth. My only regret is not having attended show of bands I did not know. I can surely say this was one great experience to be part of and I will surely come back for more, hopefully with Eibon! That woud be a great achievement and I am sure, a fantastic moment to share with my mates.
There’s a delightful black metal edge in some parts of your music, how do you think that this music has evoluted ? Are you just interested by old influential bands from the late 80’s/early 90’s or maybe any recent ones too?
We are old enough to have witnessed the birth of Black Metal and its evolution throughout the years. What makes it such appealing for me is the duality of extreme raw brutality vs. the depressive and gloomy atmosphere. Since the early stage and probably even more now, some bands succeed to bring something interesting and some did not. We do love a lots of BM from the ancestors (Bathory, Burzum) to the younger wolves (Deathspell Omega, Leviathan).
A canadian label has released 100 copies on tape from the album and previous ep, that must be something very special and enthusiastic for old-school motherfuckers like you (!, )how did that happen ?
Having our two main releases available on tape appeared to us like a pretty fun thing to do.Mike from Media Tree contacted us to release ‘Entering Darkness’ on tape and we propose to add the self-titled EP. When we started talking about the project around us, people mostly like the idea and this has been confirmed since its released.


Thanx Jérôme, add something if you want (merchandising…) ?
Thanks Steph’ for this interview, it was nice speaking to you after all these years!
We are now fully dedicated to writing new materials, our next gigs will be this November. In the meantime, you can checkout our online boutique at http://eibon.bigcartel.com/ Doom on!
http://www.myspace.com/eibonmetal
Posted by STEPHLS