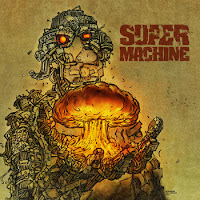 Out from New Hampshire, an American state usually pretty quiet, SUPERMACHINE is a quatuor formed -by two ex-members of Scissorfight- just a little bit more than a year ago and they're about to see their 1st album unleashed shortly by Small Stone Rds, (something that would sound like a fairytale for many bands) !!!  I already see some readers interest increasing seriously and -generally- that's indeed a serious guarantee of quality to be signed on this legendary label...

The band's name is not really original but catches attention and is pretty simple to remind, also it fits pretty well with the music which is forceful, rumbling and consistently heavy.

Particularly through catchy choruses and melodies, soaring and vibrant vocals, the overall sound of Supermachine breathes deeply the 90's when lots of bands were hardly classified between new emerging genres like most especially Grunge and Stoner, plus eventually what has been called more vaguely Modern Metal; this isn't too pronounced  with  nostalgic feel and plagiarism, not an improbable mix of Nirvana and Black Sabbath at any moment if you prefer, those guys are good songwriters and have a rather dynamic approach which is boosted in testosterones by a massive and rumbling metallic guitar sound !

Songs like "Broken", "Flesh Farm", "Pill Cruise" or "Warlord"  are throwing the faster and heavier sections like punches in the face.

And what about the grunge reference if there's not some slower, softer stuff inside ?!! "MT" is a slower, softer song, the kind of loveable grunge that most of us still like ;) SuperMachine doesn't like long songs anyway, so even if there's other quieter moments here and there, an headbanging riffage is never too far !!! "Josey Wales" has a sweet bluesy touch while the basical riff is thunderous... and "Heavy Bullet" is a kind of mix of both these ones !!!

In fact, time passes easily and even if there's not a song that stands out immediately ("Buffalo" can make a pleasant melodic mid-tempo with worthy riffs though), you rather feel that all songs are good !

The songwriting is good indeed, without being particularly audacious, it is very thick and can count on two important forces : a confident storyteller in the person of David Nebbia and the presence of Jay Fortin on guitar which not only writes relentless riffs but also delivers surging solos with a great dose of groovy blues  which often brings an heavy-rock atmosphere that is well-balanced with either the heaviest metallic tones or the more stirring ones.

SUPERMACHINE 's music needs to be played at loud volumes, maybe with a big fat joint and/or a beer but it's so entertaining that you won't need another one before the end of your 2nd listening of the album... in time of economical crisis, S.S.R. releases are still a necessary investment and if they allow you to moderate the consumption of certain expensive substances, then they're definitive winners !
Vynil and CD versions of this stunning debut will be available on May, but check it out on Bandcamp from now.