... Experience the mournful climates of THE COLD VIEW "weeping winter" 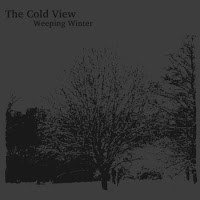 Here's a very particular project coming from Germany. THE COLD VIEW is indeed a one-man band which goal on this debut album was to create one song per month aligned to the concept of a winter album... This includes  5 songs created/composed between November 2011 and March 2012 : EMPTY, DARK, GREY, FREEZING and MOURNFUL, these are the adjectives that precede each month constituting this interesting menu (from "Empty November" to "Mournful March").


Beyond words, musical facts show that the winter's theme is aptly retranscribed through the emotionnal expression of Andreas feelings and nature experiences. Oriented on FUNERAL DOOM, the sound of THE COLD VIEW is very droning and bass-driven; no guitars here, just drums programming and ambient sounds  added in this  dark and depressed journey.
Vocals sound sometimes like a mix between Winter and Disembowelment in a more raw and primitive manner; even if that kind of depressive growls have their limits, there's solid abilities here on that point.
With a pretty good production, the songs clock averagely at about 7 minutes which isnt' too long for the style. From the first notes of "Empty November" the scene is totally freezing and desperate, there's not a progressive dive into the season, the grasping terror is immediate !  Just the last song  "mournful march" which lasts over 12 minutes is a  bit different, slightly less oppressive, though don't expect to vision spring flowers at the end !
Despite the different ambient samples from song to song, I feel there's not enough variations in the moods, at least not as much as those adjectives were suggesting it... With more creative perspectives and maybe the coming of one or two colleagues, this could be next time more consistent and then become a striking beast, an affair to follow with attention because this debut is still something worth of  experience if your into harsh Funeral stuff ! Download "Weeping Winter" for FREE from one of those sites :