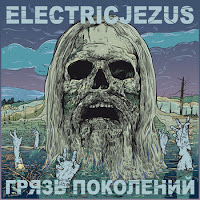 The music has strong roots in crusty HC Punk , Sludge and Doom, but its branches breathe in like everything and so the fruits and blossoms are quite full flavored. There’s a lot of Stoner, Black, Post Metal as well. It’s a blend of many different styles, but each song is focused differently and all have their own character.
What I hear in all of the seven songs is a lot of “we don’t  give a fuck what you think. We play what we want and do it the way we want. If you happen to like it, well that’s great.” Oh and I happen to like it a lot!
What I also hear in all of them is a direct and raw sound that is due to their  unconventional recording method …
“It (the album) was recorded entirely on analog equipment and it fully live record, we recorded the album close to reality and it sounds exactly as we sound on live performances. During recording, we used analog equipment from different years and from different countries, old Soviet synthesizers, old piano, use ride cymbals or broken crash with piece of metal for hi hats, use old microphones.”
There’s a kind of charming “you get what you hear” attitude to it that serves the music well. It’s bracingly unpolished and abrasive, and it flings the angry sludge riffs and hardcore punches directly into your face. The horror movie samples enhance the mood of the songs and give them some cranky creepiness (and twisted sense of humor? maybe that’s just me).
And then I also hear a vigorous pleasure of playing that brings a vigorous pleasure of listening. Highly recommended!
words by Ulla Roschat