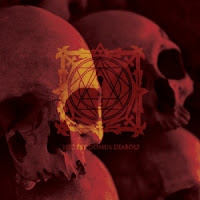 “Hic Est Domus Diaboli” – This is the devil’s house and Cult of Occult cordially invite you to enter.
It is the first full length album of the French four piece Sludge/Doom band from Lyon, released in June 2013 through TotalRust Music and it is following up their first release, a self titled EP (2011).

The opener “In Vino Veritas” is the door to the house. It opens reluctantly with heavy distortion and creaking feedback sounds. You go through that door and you instantly know it leads inside yourself, inside your own drunken mind, where slow heavy riffs and bold messages in short sentences introduce you to your very own devil who infects you with his hatred.

Images and sounds of occultish doomy atmosphere, ritualistic rhythms, slow heavy abrasive sludge, waves of distortion and screaming vocals with the energy of a hot blazing firestorm accompany you throughout the six songs and the 70 minutes of this album.

With the exception of “DCLXVI” all songs exceed the 10 minute mark. They take their time to expand. The tempo is agonizingly slow, the riffs are thick and heavy, huge and monolithic. Repetitive hypnotic rhythms, mantra  like spoken words, all enhance the sinister evil ritualistic entrancing atmosphere that kind of naturally and inevitably leads to the celebration of “Magna Eripe” in a black mass. Despite their length and monolithic character the songs keep their tension and energy by well set variations, incredible guitar parts and these aforementioned hot blazing firestorm like screams. They hook you, from the beginning and don’t let you go until the end.

“DCLXVI” - 666 though,  is a kind of interlude, a short (2:53 min.) break in the depressing slowness, an instrumental almost fast, but still heavy and evil. Satan’s jeering rock’n’roll to make you savor the crushing brutality of the following “Requiem” all the more.

“Hic Est Domus Diaboli” already belongs into the list of my favorite releases of 2013.