...Figures in black will reign supreme: BEDEMON’s ‘Symphony of Shadows’ 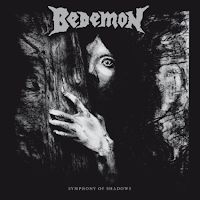 Disappointment is nothing more than dashed expectations. While 2012 has been a killer year for doom releases, there have still been a handful of high profile albums that have not lived up to expectations primarily due to sharp shifts in songwriting, production, or overall modus operandi. Enter Bedemon, a recording project that has existed primarily as a curiosity due to its affiliation and shared personnel with Bobby Leibling’s doom revanent, Pentagram. To be honest, when I heard that Bedemon’s ‘Symphony of Shadows’—an album at least ten years in the making—was finally going to see the light of day my anticipation level was less than zero. The ‘Child of Darkness’ recordings were an oddity of excellent, albeit incomplete ideas that were hopelessly marred, as many basement recording projects are, by terribly thin production. Another factor complicating the completion and ultimate release of ‘Symphony of Shadows’ was the untimely death of Bedemon’s doom visionary and head guru, Randy Palmer. Surviving members Geof O’Keefe, Mike Matthews, and new vocalist Craig Junghandel were left to pick up the pieces, build on Randy’s ideas, and finish the album while trying to remain true to the spirit of Bedemon and their deceased friend. What could have easily of ended up as a disaster has in fact turned into one of the best surprises of the year. Regardless of Pentagram/Bedemon history, ‘Symphony of Shadows’ stands on its own as one of the strongest releases of the year primarily due to its seamless mix of old school doom, hard rock, and punk.

Album opener “Saviour” is a dark meditation on the abuse of power, the spoiling of innocence, and the ultimate aberrance associated with modern day religion, particularly the Catholic Church. What could have merely been a straight-forward rocker is accented and darkened with chorus chants, superb lead playing courtesy of O’Keefe, and a diabolical vocal delivery of Junghandel. Musically the following track “Lord of Desolation” is doomier than the album opener and the track is really carried along by Matthews’ bass playing and the occasional gong crash while providing the album’s most memorable mantra “Figures in black will reign supreme/No one wakes from this infernal dream” delivered by Junghandel in a sinister whisper. “Son of Darkness”, arguably the strongest track on the album, is an up-tempo doom masterpiece that channels the best of ‘Master of Reality’ era Sabbath without resorting to mere emulation. In the album’s liner notes O’Keefe claims that “Son of Darkness” is the ultimate collaborative effort of the band members and it shows by highlighting the individual talents of every member.
“The Plague” slows things down a bit compared to the energy of “Son of Darkness”, but the song is no less effective in grabbing the listener’s attention. Again, Matthews’ bass playing really carriers the tune along with some atmospheric guitar strums and blistering guitar leads to close out the tune. “D.E.D” falls on the hard rock end of the spectrum compared to a majority of the tracks on ‘Symphony of Shadows”. While it wouldn’t be fair to call “D.E.D.” filler material, it simply doesn’t have the impact as the rest of the tracks on the album. If “D.E.D.” is the album’s weak spot, “Kill You Now”is the ill-fitting bastard child that somehow manages to work. While the tune isn’t nearly as hard-hitting or raw as “Search and Destroy”, it does seem to channel the best of Iggy and the Stooges with its lyrics, punk-inspired riffing, and handclaps. After the detour of “D.E.D.” and “Kill You Now” the album returns to the realm of doom with“Godless”, another solid slab of doom-tinged hard rock as is the following track, “Hopeless”. Album closer “Eternally Unhuman” aptly closes out the album for its last two minutes alone. The repetitive recitation of “Nothing will ever be the same” accompanied by screams as the music fades out is nothing short of chilling.
It’s difficult to say how ‘Symphony of Shadows’ would have sounded with the continual involvement of Randy Palmer to its ultimate conclusion, but it would be hard to imagine that he could possibly be disappointed with the finished product as completed under the supervision and care of his bandmates and friends. ‘Symphony of Shadows’ is a welcome surprise with its grim lyrical content, chants, doom riffs, and tremendous bass playing. Despite the mix of doom, rock, and punk, each one of these tracks are stamped with a distinct, infectious, unifying sound. It’s sad to know that Randy’s genius is lost to the music world, but this collection of songs—finished posthumously—is an admirable legacy. Based on the strength of all of the players it is hoped that these musicians will continue on, in some form, to bestow their brand of doom metal on their fans.
words by Steve Miller
http://www.facebook.com/bedemondoom
http://bedemon.com/
http://www.svartrecords.com
Posted by STEPHLS