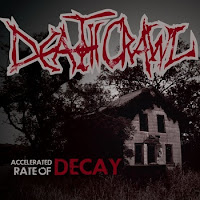 After a 1st album "the end is not near enough" and an ep "this is the way the world ends" where the initial aesthetic of depressingly slow, low-tuned, crusty Sludge eventually gave way to include mid-tempo grooves, progressive riffs, and even grindcore elements as DeathCrawl evolved, the guys are now back three years later with this "Accelerated Way of Decay" which from the first notes of "burned out" marks a real step forward both sonically and musically.
DEATHCRAWL is still a terrific machine of decimating heaviness but don't expect here a discontinuous deluge of brutality and dissonance, sure this is violent and extremely heavy but just like there's a nice diversity in vocals, music lets place to various paces and ambiances, well-crafted soundscapes, all enveloped in a coldly mastered insanity.

"Disturbing the Earth" starts quietely, even with clean melancholic vocals more than a few seconds, based on an infectious and pummeling slowed- down tempo (basically those are some recurrent caracters), it keeps all along a menacing tone enhanced by explicit lyrics that declaim the abuse of men towards the environment and the apocalyptic fate which he suicidally works on... This is the general thematic of the lyrics from what I had the possibility to read about, maybe sometimes more nihilistic or sarcastic according to the tempo and weight of the songs.
"Killed or be killed" could be the fave one of most listeners, with an almost deathed-up mid-tempo, it shows all the consistency and variety of all the nasty and brutal sounds that DEATHCRAWL has in stock for you !!!  I can't tell which guy is mainly singing here but one of those "throats" really reminds me Chris Reifert and I feel it like another strong argument :)
Other various proofs of richness can be regularly found here and there in this soulful maelstrom of failure and violence like in "Maginot" and its sharped crushingness, "despite our best efforts" and its doomed harmonies or the closer "Lucifer's hammer" with its entertaining riffage and overlapped vocals.

It took quite some time to Deathcrawl to release this sophomore album but it was definitely worth the wait, because in this overcrowded scene where Sludge bands raise everyday from almost everywhere, those guys are faithful to the good old recipes while adding a real musicality and remaining incredibly heavy ! Highly recommended \m/