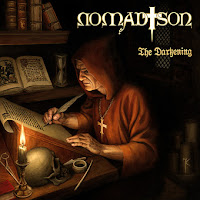 Formed in 2006 by veteran of the scene Albert Bell (bass) along with Frenzy Mono members- Jordan Cutajar (voc), Chris Grech (guit), Julian Grech (keyboards) and Edward Magri (drums), NOMAD SON is back with a stunning 3rd album "The Darkening" - to be released on August 30th via Metal on Metal Records...If Forsaken is Malta's most renown band for more than 20 years, one has to admit that NOMAD SON is actually its most interesting (local) descendant and after two extremely interesting first albums - namely "First Light" and "The Eternal Return", everything has been done here again in the most professional way to explode more widely in the face of worldwide Metal warriors...I'm convinced that all Forsaken fans are potential fans of N.S., as both bands sound is basically boiled into authentic Heavy Metal and Doom but whereas Forsaken's main personal touch is characterized by epicness, Nomad Son ventures deeper into the 70's and early 80's roots of Heavy Rock/Metal genre... Then you can still talk about who's more traditional, who's more melodic or whatever, you've simply got two different bands whose main common characteristics are originality, tightness and a great respect to the elementary codes of METAL!!! The album starts with "Light Bearer", a pivotal entrance for what is to come in the next 50 minutes; without overdoing it on the production side, the overall sound is thick and immediately a dense feeling is emitting from this dynamic up-tempo song with gripping chorus hooks. At first you could think the band should have maybe placed this one later as it sounds quickly like a kind of zenith-song but "Age of Contempt" proves quickly to be another empowering and evocative masterpiece, just as the following ones will, and leads to the obvious conclusion that everything here is cohesive and at the same high level of composition!Forming the heart of the album, "Only the Scars" and "Descent to Hell" are mid-paced songs with a pretty galloping approach for what is still basically traditional Heavy doom-laden Metal to raise your fist high in the battle; even more finely than on their usual fields of fertile expression, those keyboards play here a great role in the right balance found between aggressive heaviness and atmospheres!!! As says the label in their promo sheet, N.S. style is also all about versatility of moods; the flamboyance previously described is soon followed by somber, mysterious, intriguing songs like "The Devil's Banquet" or "The Darkening" with ominous Hammonds and raspy vocals, "Caligula" a monster of tremendously malevolent hauntingness which sets an impressive aura of impending doom, or the hard hitting and haunting at the same time "Orphaned Crown"... The album's art takes then all its dimension, perfectly in harmony with the special tone of solemnity often enhanced by Jordan's strong delivery; the booklet layout is very impressive and makes this album definitely essential in all regards, it's nice to see that some people always consider artwork and lyrics sheet as essential, even the thanks list (one of the biggest I've seen in long years!) is something that has been worked on very hard, with passion and devotion.No wimpy ballads, no boring long songs, no demonstrative bullshit, just pure face-melting Metal with melodies, heart and soul... oh, by the way - maybe some of you didn't know that N.S. can be classified in the Christian camp of Metal bands?! Well, this spiritual dimension is subtly delivered and in no case a prominent (and eventually detrimental) element systematically exposed! I already wrote some flattering reviews on some of their colleagues from Metal on Metal Records here in the blog, think about Arkham Witch and Mortalicum latest albums - but honestly "The Darkening" is in my opinion the most memorable of all, and NOMAD SON reaches here an impressive level of excellence - not just musically but in its whole identity... HIGHLY recommended to fans of Dio, Candlemass, Deep Purple, Stone Magnum...!!!


Together with this third album - Metal on Metal Records will re-release the band's sold-out debut from 2008, "First Light". It will be out on DVDplus format together with "Pilgrimages of Doom" DVD, and with completely new layout. The DVD contains over 2 hours of pro-filmed and edited exclusive footage from the band's gigs at Hammer of Doom, Doomsday, Headbangers Open Air warm-up and Doom Shall Rise festivals, interview, a song from Maltese TV program and slideshow.