taste the welsh Heaviness with DOOM CHILD "blest by sinners" 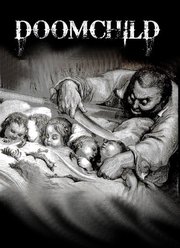 Like writen in the short presentation of the band a while ago, DOOM CHILD have recently released their debut effort "blest by sinners". Call that as you want, ep/mini album or full lenght , it will always contain six (great) songs for about 30 minutes of some of the heaviest metal around !!!
This is what I wrote last May : "despite its name, the style of this band is not exactly doom, netiher sludge or stoner or thrash... a mix of all ? difficult to precise, I would say this is simply pure down-tempo METAL, heavy and loud with bright and harmonious guitars,  catchy raw vocals and a massive rythmic".
Nothing really changed towards this appreciation/description; in some way it says it all,  DOOM CHILD has a real identity and this six songs release largely confirms that... It starts with their previously recorded (hit song) "sands of time", which gives the tempo of the whole release and definitely shows the wide range of influences the band is under, from Down to My Dying Bride, Danzig to Celtic Frost... HEAVINESS, this is what prevails here, generally seriously breaking your neck and kicking your ass at the same time ! Lyrically in a rather engaged reflexion about today's world deviances, Scriv's vocals are harsh and angered in a perfectly well appropriated manner, sometimes bordering the frontiers of sludge. Never fast, neither extremely brutal (depends of what you call "brutal", my wife would precise !) , the music of D.C. can also be more melancholic ("S.O.D.") reminding the (golden) early days of the english doom/death scene, particularly those brillant whispered vocals that some Aaron S. or Nick H. would certainly respect very much. 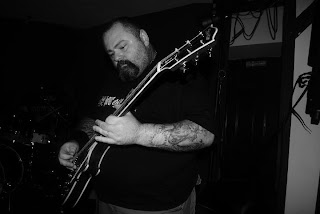 This is raw and melodic ("solitude"), pure and filthy, enriched with catchy and regularly contrasted atmospheres, with an average lenght of 5 minutes which is perfect for me, despite a very skilled musicianship that could easily allow demonstrative overflows.
The band gives regularly shows, including the Slugfest and Rocktoberfest this summer; they plan to record again before the end of the year which is a fuckin good perspective. Before this, such a solid effort at such a weak price deserves your immediate attention (ask infos about the cool T-shirt too) !!!