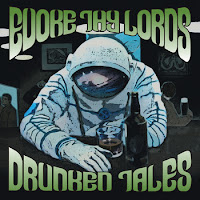 Evoke Thy Lords (Russia, Novosibirsk) gathered in 2002 and, at first, moved in the rut of many Russian Death/Doom bands playing in that unpopular genre for a few years. It took them a long time to record their first album 'Escape to the Dreamlands ', which was released in 2008 and consisted mostly of slightly Gothic Death/Doom with one specific feature – amidst all instruments there was flute which give some original touch to Evoke Thy Lords stuff. In 2009, the band released new but already overtimed stuff on the split album “Twofaced” with another project of multi-instrumentalist Lefthander - Riders On the Bones. The same year the band took part in another Doom-Art.ru compilation with a remarkable outstanding composition 'Cause Follows Effect'. It was an intellectual and deep psychedelic Sludge with some jazz savour and a great portion of experimental stuff. Now, that was unexpected and quite a pleasant surprise that set the wheels in motion...

And the motion was wasted for quite a long time. Recording for the new album of reborn Evoke Thy Lords was finished only in the fall of 2012, when I interviewed HERE in Doommantia Aleksey Kozlov (bass, vocals). After listening to the new pieces I really hoped that the band would soon find the way to release them. Indeed, shortly after our talk the album was released by Solitude Productions. Guess this label is the best choice for a Russian doom band.
Well, you may figure out some conclusions about the renewed sound of ETL by the album's cover. Although, it's a pity that the cover theme has no further expansion in the humble booklet, you may find the whole lot of new ideas in the CD content. This cosmic to the core, moderately heavy, melodic trance doom is unique not only for Russian scene. I bet, you won't find anything comparable in the whole huge doom world. To my joy, the band threw away all that rancid grandma's Doom/Death leaving from the old ETL only the flute and aimed at some extra heavy psychedelic Stoner Doom with a tint of Sludge.

'Drunken Tales' includes four new pieces and a bonus track - that very 'Cause Follows Effect' which has become the heaviest track on the album. The leading role now belongs to hypnotic acoustic passages accompanied by flute as the cyclic nature of the music and it's 'acidity' reminds me of My Sleeping Karma. Another leading element on the album is the solid groovy guitar riffing, relaxed yet heavy. In the new music of ETL, there is a place for some stoner and even for post-metal ('Down The Drain'); improvisation parts and flute remind of a certain jazz nature of some elements. But everything come with it's price, and now there is no too much place for vocals. The growl is intentionally placed in the background so that it couldn't distract you from the melody. Now it's only one of the instruments and plays rather a supporting role.

'Routine of Life', 'Dirty Game', 'Down The Drain', and 'Dregs' are overwhelmingly good. They engage my attention and hypnotize me with the tune. Rythm and pulse resonate with the entire body. But I have to admit, that it's hard to address an individual description to each track. First of all, all tracks sound so authentic that it's hard to classify them. Of course, you may call it a 'Sludge version of Jethro Tull', but that would be only because of the flute. Second of all, all tracks are great, but to the equal degree of greatness. It's not a flaw, but it makes it harder to describe the album in details. The only standing out track is 'Cause Follows Effect' which was recorded in 2009. It sounds heavier, more aggressive and greasy. Nevertheless, that's the only track where you may hear some female vocals. Damn… I was totally enchanted with the recurrent phrase 'something wicked this way comes..' It’s magic… Follow the tune, follow the flute… Follow the flute I say!

Although they cheeped out on the bonus track, Evoke Thy Lords have done a great job. 'Drunken tales' demonstrate original edgy and almost god-inspired music. Let the music flow from one track to another, and you'll get lost in the depths of improvisation. I like it and I want more of it. What's even more important, the band has found a generous place for creative experiments. I would expect further experiments with instrumental sound, vocals and other stuff. The only thing that I worry about is that we may have to wait too long for the next Evoke Thy Lords album, time shall tell…