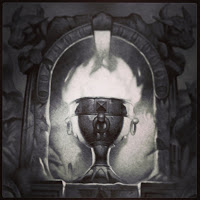 Vancouver, British Columbia’s Funeral Circle caught my attention a few years ago with the release of their debut EP ‘Sinister Sacrilege’. It took me awhile to track down a physical copy, but when I finally did I was rewarded with a traditional doom metal album that was wrought with an occult atmosphere and, at times, over-the-top heavy metal excess. Just listen to the NWOBHM gallop of the EP’s fourth track “Fist of Satan” with its Halford-like maniacal laughter and its chant inducing chorus, “When I say what—you say Satan. What?...What?”, for a taste of the band’s tongue-in-cheek brand of sinister doom metal. Just try not to respond, “Satan!...Satan!,” while pumping your fist in the air. Fast forward four years and the band is about to let loose their self-titled full-length debut for mass consumption. Needless to say the wait was well worth it.

The most notable change to the band’s sound is an unwavering focus on traditional doom replete with a darker, more austere atmosphere than its predecessor. The tempos remain slow and low while the vocals have been reigned in a bit and, for the most part, are confined to the lower registers. While the faster, NWOBH influences of the band’s past definitely put Funeral Circle in a realm of their own, there is no denying that the band is just as adept at composing doomed dirges fit for ritualistic sacrifice or for invoking the Master.

Funeral Circle puts its best foot forward with the powerful “Scion of Infinity”. The self-titled album opener is not only one of the finest tunes penned by the band, but it also serves as a harbinger of things to come. “Scion of Infinity” immediately invokes other contemporary masters of the genre such as Procession or Rote Mare by venturing into the dominion of down-tuned yet melodic doom. The latter half of the track is gloriously imbued with overlapping, ethereal guitar leads that pushes the listener over the precipice and precariously holds them aloft the doomed-out soundscape. “Scion of Infinity” may be one of the strongest tracks on the album, but I would hesitate to call this album front-loaded.

Heavy. Eerie. Epic. Melodic. These four words accurately sum up another album highlight “Corpus of Dark Sorcery”. The melodic lead guitar intro harkens back to the Funeral Circle of old, but the band ultimately settles into a funereal pace. The track is bestowed with a greater depth of diabolical atmosphere through its use of whispered background vocals and glimpses of the higher registers of the main vocals that were found in abundance on the band’s debut EP.

Where does the band fall short? Nowhere really. Depending on your perspective, the acoustic, spoken word third track, “Tempus Edax Rerum” (Latin for “time, devourer of all things”), can be viewed as either extraneous or indulgent. The band, unlike their contemporaries in Procession, wisely keeps their album’s interlude brief—just under three minutes—and stylistically different from the rest of the album. There are those who will view “Tempus Edax Rerum” as a brief annoyance while others will find that it breaks up the album nicely. I’m slowly beginning to be swayed toward the latter opinion.

Funeral Circle’s return to the fold is long overdue, but those who have remained faithful will be well rewarded with the release of the band’s upcoming self-titled full-length. The band has refocused their sound by shedding their NWOBHM tendencies and adopting a more somber approach to their songwriting. The end result encompasses everything that should be found in a traditional doom metal album from the heavy, memorable riffs to the all-enveloping atmosphere of hopelessness and despair. The band should be making announcements on a physical release for the album soon.