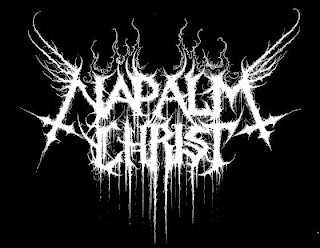 Not only the wicked lady's soul has been seriously impacted by Little Rock's merchants of debauchery-ridden tactics NAPALM CHRIST - with their killer 'Demo 2013'... your servitor too was impressed by their overwhelming and volatile brew of charged-up doom/grind influenced Death Metal and wanted to know a bit more on those guys, especially now that this striking affair will be soon widely released as 12'' by A389 Recordings !
Don't know if anyone will follow me on this feeling, but NC music -at times- awesomely reminds me the good old early years of At the Gates, when a certain Alf Svensson was giving birth and (a brief) sense to melodic Death Metal... But NC's sound includes more than just catchy death metal with piercing melodies, strangled yellings and tremolo picking, it also reflects some pure fucking Doominess with chaos, dissonance, grace and sorrow; believe me, you've got here new cadors to rip your ears !!!

ToP: Hi guys – thanx for accepting to answer the few following questions… First, could you tell us what does the band’s name mean/reflect exactly ?

NC: The name was actually taken from an instrumental by our drummer's old band, Shredded Corpse.  His dad was a Vietnam veteran so I'm sure that, along with all the Vietnam movies of the 80's and that fact that his favorite drummer is Mick Harris all had something to do with the name/title.

ToP: The band formed in 2010 but it took you quite some time to release this 1st demo, did you have to face  problems to complete the line-up or was everyone too  busy with other projects to make things take off more quickly, or … ?!

NC:  The most honest answer is that were old, slow and a little lazy.  Of course you got other things like wives, kids, jobs, other bands, hangovers, diarrhea, athlete's foot and so on.  But all those things are ultimately just excuses for being dumb, not so young and full of shit.

ToP: You guys (Kiffin and David) were playing in the same death metal band Shredding Corpse 20 years ago, in some way -  does NC mark a return to your 1st loves ? do you know each other since your childhood or adolescence ? did you keep in touch during all those years ?

NC: Dave was an original member of Shredded Corpse but I only played bass for a few shows in Arkansas and Tennessee along with recording one song with the band on one of their last demos.  He and I met at the first Shredded Corpse show in Little Rock as I was playing in another death metal band around the area.  We've played together in a number of short lived bands since then.

ToP: Also, if  Alan Wells made just a brief passage in 2009 in Rwake -  where Kiffin is still playing for about 10 years,  it at least had the merit to connect you on the future creation of NC the year after… ?!

NC: Alan had actually played with Dave and me in one of those aforementioned short lived bands before either one of us had joined Rwake.  This was around the time he had started up Downtown Music, a (mostly metal) music venue in Little Rock, a little over 11 years ago.  We would jam there at the club during the afternoon for a few months before other members stopped showing up.

Alan's main band around this time was Shitfire, which Mike eventually joined around the midpoint of their existence.  Just about every citizen in the state of Arkansas has been involved in some kind of band or endeavor with each other multiple times. 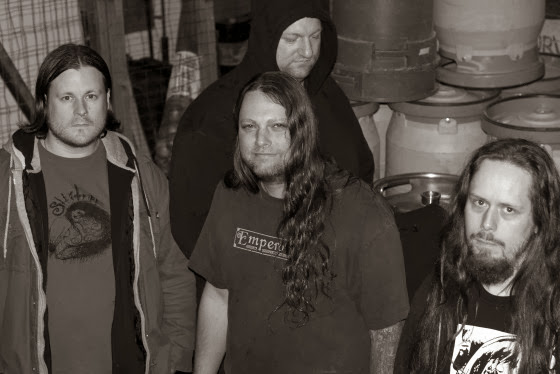 ToP: Basically death metal, your music blends various beats and atmospheres which put additionally in mind Doom, black metal  and even crusty HC… in any cases I feel it has an early 90’s European flavor ( swedish particularly - for some shredding parts and blistering melodies), on the other hand,  even if not as obvious, the slowest parts like in the 1st part of  “Reclaimed by the earth” or “nuclear holy war” reminds me some doomy horror of Autopsy…  what’s been your most influential school over the years ?

NC: You pretty much said it yourself with the first three words there.  But nobody in the band writes from a purist perspective and a good riff is a good riff no matter what genre it may or may not bring to mind.  That doesn't mean we're going to try and fit a grind/reggae part into a folk power ballad but we never really know what exactly is going to fall out of our asses.

ToP: After  the Tape format released by Goatprayer rds, now, the big news of the week is your signing with A389 recordings for the release of the demo on a 12’’ vynil…  I guess this is a major step forward for the band ?

NC:  It'll definitely make a lot more people aware of us along with making our releases more available.  We're slightly different than what some might interpret as an A389 band.  But at the same time there's no shortage of bands on there that we share a lot of the same sounds and traits with.  There's an awesome balance of HC, Grind, Thrash and a bit of Doom and Death in there too.

ToP: It’s also said that there’ll be a  full-length debut album released later in 2014, so I suppose there’s quite a lot of material composed yet, could you give a few details on new songs please ? In which way your last songs composed (in 2013) show a development over a demo song composed 2 or 3 years ago ?

NC: The newer songs we've been working on so far are bit more schizophrenic and faster overall.  Though the final versions of the songs could be completely different once we've hacked away at them for a while.

ToP: Such good perspectives must give a lot of confidence for next year,  hopefully things should follow on the Live front ?, any gigs already planed for the following months… ?  on stage, is that more exhausting  to play in a death metal band rather than in Sludge/doom or doesn’t make much difference ?!

NC: We'll be playing the final show at Downtown Music in a couple of weeks.  Alan sold the business to a different owner a couple of years ago and recently the owner of the building has sold the property out from under the current owner of the venue.  After that we'll  get out to different parts of Arkansas a little and make it to a few neighboring states as well.
I wouldn't say playing one style is more exhausting than the other (a drummer might have a different take on that one though). But having to scream your brains out while playing guitar is definitely a headsplitter.

ToP : Add something for the Templars if you wish (additional merchandising for example) …. Thanx !

NC : Only thing I could say for sure about merch right now is stay tuned to A389 for the vinyl release sometime in the spring most likely.  Most likely we'll have some shirts available online in a month or so.
Thanks to Ulla for the previous review.  Also thanks to Stephane for the interview and to any of the Templars that read it.