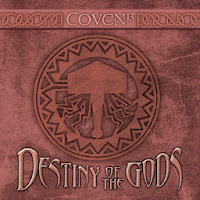 You won’t love this album.
But it is a very hard album not to like.
The litany of 80s US metal is full of underdogs, from bands who once made a mark but were later forgotten by all but a die-hard minority (Riot, Omen, Crimson Glory), bands who achieved a cult following but never, arguably, the break-out success they deserve (Manilla Road, Virgin Steele, Cirith Ungol) and finally bands whose enthusiasm for heavy metal exceeded their grasp of its idioms, leading to idiosyncratic offerings of metal as outsider art, albums that you either love or hate. Broca’s Helm and Coven, now Coven 13, exemplify this category in my mind. Coven 13’s 1987 debut, ‘Worship New Gods’ was a ragged, uneven and gloriously cheesy affair; most of all, for anyone who loves the spirit of classic heavy metal, it was an album with its heart in the right place.

More than two decades on, the boys (now middle-aged men) are back, and this new album is better produced and more assured than their debut, but it’s still a little a tad amateurish – in the good sense of being motivated by a love for the thing being done, but also to an extent in the other sense of not being done with a certain level of expertise or smoothness.

Certainly there is nothing to complain about on the basic level of musicianship. The band is tight and effective, and there are melodies and riffs that stand out. For the most part, though, there is nothing especially original here. The solos are expressive, the arrangements are effective, there is a an air of restraint and a skillful evocation of atmosphere which shows the distance these musicians have traversed since their 80s debut.

These songs are likeable, sometimes catchy. The vocal style is the most unpredictable aspect here, from the Reverend Bizarre-like deep vocals of ‘Thor’s Twins’ to the more punky delivery of ‘Spellbound’ or the wail on ‘Solitary Days’ which weirdly reminds me of Afghan Whigs’ Greg Dulli. I can’t help but feel that David Landrum isn’t as bad a vocalist as he’s sometimes made out to be, simply one who should work within the limits of his range more effectively. On the plus side, he does have a variety of vocal shadings to draw upon.

Although the band now style themselves ‘Nordic Doom Metal’, the music is largely uptempo, as in ‘Thor’s Twins’, the rousing ‘She Rides The Dawn’ or ‘Frost Giants’. ‘Elfstone’, a lyrical portrait of Tolkien’s Aragorn, is an anthemic piece of classic NOWHM-leaning metal while ‘Witches Kiss’ has a groovy vibe that harkens back to late-70s hard rock and metal. Te ominous ‘Walpurgisnacht’ showcases the band’s more doomy side and ‘Winds Of Revelation’ is a suitably martial, Nordic-themed album closer.

It’s a very likable album. I keep returning to that thought. I think it will work best if you put aside the expectations you may have of the more polished heavy metal put out by some other Shadow Kingdom artists and take the time to listen ‘Worship New Gods’ first, because, all said and done, Coven 13 have a unique style of their own, a style hammered together from classic metal influences but transmuted into a quirky and valid original metal vision.