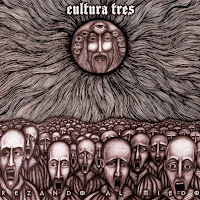 On their third album since 2008, Venezuela's finest (only) doom band come across darker and more psychedelic than ever. While this statement may sound clichéd, it will hold true if you compare "Rezando Al Miedo" to its predecessor "El Mal Del Bien". Just as the title (juxtaposing praying and fear) as well as the cover invoke notions of collective paranoia, Cultura Tres' music is capable of mass-hypnosis without falling into the trap of becoming indistinct ambient drone or whatever, although a large part of the last song's twenty minutes are just that: whirring noise, but may be considered as a neglectable outro.

Ditching his roots in Death Metal almost entirely, Alejandro Londoño is at times chanting, at others whispering, but rarely screaming in a uniform way like oh so many sludge-singers do, "Hole In Your Head" being an exception, but here, the plodding instrumental bottom sounds the more interesting. Subtle dissonances make this album in part even seem like a post hardcore affair, especially during the dire "En Esta Tierra", which builds up tension with a veritable wall of sound. However, the nearly classical guitar solo harks back to the more or less obvious classic rock roots of the group, which in return does not mean that its compositions are in any way catchy.

"1492" (remember Ortega), the song which is most involved with European colonialism of South America, it seems, displays a fabulous development from furious, double-bass driven anger towards bluesy tinges of true beauty and is easily the highlight on "Rezando Al Miedo. In any way, the positively nerve-racking bent notes which comprise the main motif of "Es Mi Sangre" or the inventive title track (actually an instrumental) should rouse enough interest among insatiable fans of the ugly bottom end - a place where Cultura Tres rank among the most unique bands of their time.

words by Andreas Schiffmann
“Rezando Al Miedo” will be released in May via Devouter Records in UK and Cumpa Records in South America
https://www.facebook.com/culturatres 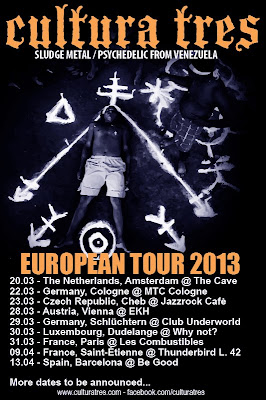