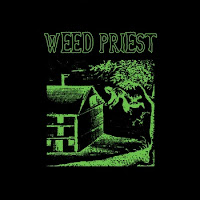 Formed in 2008, WEED PRIEST are a 3 piece from the west of Ireland, they released a demo CD  a couple of years ago, played a fair number of gigs (including the last Dublin Doom Days as headliner) and are now about to unleash their debut self-titled album Through HexenHaus.

As you've already guessed it,  we've got here a weed-worshiping stoner sludge doom outfit following the riff with a deep occult dimension.
The long opener "Final Spell" rather classically take influence in Electric Wizard or "Erichto" in Sleep but W.P. is not the kind of band that plays just loud and fuzzy repetitive riffs during 10 minutes (which is the average lenght of the 6 songs present); no, like an Ufomammut, Huata or S:T Erik, they  try to juxtapose the darkness of doom and bonecrushing heaviness of stoner/sludge with some supernatural/psychedelic experimentation.

And, indeed their territory of expression, lyrically and physically ("recording sessions on occult dates in locations of spiritual significance") deal with the occult, the supernatural, necromancy, witchcraft, psychedelic/religious experience, death. That’s why they like to call their music "occult stoner doom"!

Vocals by Adam are pretty harsh and commanding for the genre, they are often scary and tortured-like but not like your usual blackened screams, more like an inner malevolence, perfectly at ease with dirty guitar riffage and  monolithic rythmics, while the more experimentative parts remain instrumental anyway.

The solo of "Erichto" has a touch of hard rock/blues, while most others turn into more psyched-out dementia that gives an impression of Ufomammut at their beginnings - when they were still humans, understand not as deeply experimental as on last efforts !

"Walpurgia" is a great song filled of droning darkness - where we feel the most that occult dimension, the singing has a  from-beyond touch that is striking, the song ends in a pure old UK Doom/Death mood with soaring melodies and a melancholic touch...
"Thy Kingdom Gone" sounds like a DM titlesong but is maybe the most hypnotical piece of the album, while "Day of reckoning" is a slow, bone crushing piece of haunting doom that is perfect to close the album, the hammering riffage is simple yet effective and dirty with distorted muddy bass lines; the siren at the end sounds like a warning to the scene : WEED PRIEST - with this 1st album knocks at the door of the 1st category of weed-worshiping Stoner/doom band and if it doesn't open this time, they'll break it with next album !
Album release date is 25th February 2013. The CD and digital download are available from their bandcamp below.