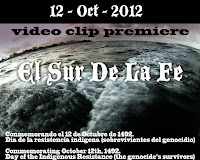 El Mal Del Bien delves deeper into the dark atmospheric which the band had already shown at moments in debut their album La Cura. The daring album opener “Propiedad de Dios” sets the mood: it sounds like the soundtrack of a tragic cult movie. The songs that follow evoke the witchery, slavery, oppression and religious madness that influence the South American continent to this day. Being a concept album adds another dimension to the individual songs. A patient listener will be dragged into a hallucinating trip around the insane world the album paints.

Cultura Tres are now hailed as the national rock/sludge pride of Venezuela. From their first EP "Seis" (2007) the band already outgrew the South American continent. But only after releasing debut album "La Cura" in October 2008, the band started to get noticed worldwide. During the preceding year of rigorous composing, Cultura Tres incorporated many influences into their sound, ranging from sludge to doom metal and from death metal to classic rock.

Important magazines in Europe and Japan praised “La Cura” for its dark and original music, and Metal Hammer magazine even selected Cultura Tres as the month's global discovery. The release tour took the band during 18 months across Europe, South America and to the first well-received shows in Japan. In that period the band also released three video clips that gained them a world-wide cult following in the underground doom & sludge scene. The most important underground and mainstream media are unanimously praising the unique direction the band has taken. It also led to the band being requested to deliver a track for the Global Metal CD of Metal Hammer (in the Sept. 2011 issue), and many appearances on TV and radio with interviews and specials, as well as an appearance on the closing day of the already notorious DesertFest 2012 in London (alongside Orange Goblin, Karma to Burn etc).

So far this year the band have played Venezuela, Argentina, Peru, Holland, UK – with more UK dates planned for November:

“For us it refers to two things: the way religion is experienced in the area where we come from and the hidden side of the faith and its illusive benefits. We would like people to reflect on the impact religion has had on the lives of the original inhabitants of the Americas; how the Catholic church and it's covered-up, gold hungry crusade practically exterminated a culture older than Christianity itself.

In this sense, we didn't choose Oct 12th for the premiere of the video by accident; it is a day to contemplate and condemn the invasion and genocide that followed. Unfortunately, repressive, genocidal and extermination policies are still present in many parts of the world and in 21st century Religion is still married to Politics; and this marriage is still used to instill fear and maintain ignorance, often backed up by one of their most faithful children: War. This
is what this clip is about.”