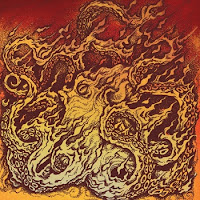 The sheer weight and magnitude of Slomatics’ third full-length, ‘A Hocht’, easily crushes and surpasses the band’s previous works by increasing not only the overall heaviness of their sound, but also by including and exploring darker textures and atmospherics. Tony Roberts’ “Flaming Octopus” album cover encapsulates the unadulterated visceral offensive launched by the Belfast trio—it’s a massive, fiery slab of impending doom that is awash in moments of beauty and calm. Without the presence of a bass player, the low-end thrum created by guitarists David and Chris and singer/drummer Marty is nothing short of amazing. Slomatics are able to plunder the depths of suffocatingly heavy music without sacrificing catchiness or momentum.

“Inner Space”, the ominous introduction to ‘A Hocht’, is an exercise in ambient intensity. A depth-charged, low-end rumble is accompanied with washes of feedback that ultimately concludes with a cymbal roll crescendo that ebbs into nothingness. Like a down-tuned air raid siren, “Flame On”pierces the silence with a thunderous roar. This second track is the accompaniment to martial law as Marty’s bellows have a dictatorially quality that rises authoritatively above the din. “Flame On” simply crushes. “Beyond Acid Canyon”slows things down to a doom crawl with sluggish, heavy riffs and the tolling of a bell. Over the next six minutes Slomatics manage to exert the equivalent pressure of being submerged 18,000 ft. below the surface of the ocean with only a brief respite as “Beyond Acid Canyon”momentarily drifts through more dreamy, tranquil waters. “Return to Kraken” amps things up with a tumultuous, driving riff that sounds as if David and Chris have exchanged their guitars for a couple of impossibly distorted basses. The song is a continuous wave of distorted fury until it breaks down into a slower section layered with memorable leads.

The glorious “Tramontane” ushers forward the second half of the album with an anticipatory slow burn. The mood is established through intense, sporadic drumming, and steady, sloth-like riffing which is glazed over with a mesmerizing hum before erupting into an all-out assault of doomed-out proportions. At just over seven minutes in length “Tramontane” is the longest track on ‘A Hocht’ and not a single second is wasted or unnecessary. The oppressive, sludge-suffused doom of “Tramontane” ultimately yields to the delicate placidity of “Blackwood” which offers the listener a haven of ambient textures and alluring, siren-like vocals before Slomatics resume their mission of crafting megalithic tunes of the utmost density. The instrumental “Theme From Remora”relies almost exclusively on repetition for its entrancing effect which is accented through both the drumming and background noise. Finally, all good things must come to an end and the appropriately titled “Outer Space” bookends the album by combining the ambience and repetition found on the previous two tracks into an eerie amalgamation of desperate noise.

Every release from Slomatics is worth checking out, but they have made tremendous strides since their last full-length release, 2007’s ‘Kalceanna’,strides which were intimated on their 2011 split with Conan. The band has crafted one of the heaviest and most memorable releases of the year, but they have also managed to imbue ‘A Hocht’ with moments of serenity and beauty—a feat not easily accomplished. One of the year’s best.