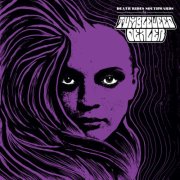 From Montreal, here's a band that should maybe help the DOPETHRONE sickos to feel a bit less isolated during the approaching long winter ! It is certain that TUMBLEWEED DEALER have a few common points with them if we talk about weedy and eventually bluesy infused vibes (very developped here) but don't expect any Sludge with this instrumental act, it is heady but not filthy, nor viciously crushing.
The band, consisting in Seb Painchaud (Guit/bass) and Félix Roberge (drums programming, plus he also did the mix for the ep), describes its style as Stoner/Post Rock/Math/Blues with influences from Earth, Mahavishnu Orchestra, Auto!Automatic!!, 35007, Horseback...
Well, what can I say about that as there's here some terms and names I'm really not into ?!!! I naturally agree about Stoner and Blues which are both predominant but I honestly don't know what sounds exactly Post Rock (a little pinch of ethereal melancholy maybe ?) here and even less Math which remains at my ears a rather abstract style... Just as I'm ok with Earth as a reference but can not say anything about the rest that is completely unknown to my poorly cultivated ears !!!
All I know in fact is that both songs of "Deathrides Southwards" are very INFECTIOUS stuff;  slow-paced, halfway between crushing and relaxing, very catchy and just enough obscure with a very bluesy and weedy latent general mood !!!
I let you judge by yourselves with their freshly released EP which you can download for FREE here (MP3) or here (in high quality .wav format with artwork)
You've got to know that TUMBLEWEED DEALER will enter a studio tomorrow to start recording for their full length debut album tentatively entitled "Dirt"... They are going to record it by themselves in several parts and hope to end it by the end of the year, 1st song recorded will be ""How To Light A Joint With A Blowtorch" !!!
Gigs are also in the works and guess who will be handling drums for live appearances ? Monsieur Vincent Houde (from Dopethrone) himself ! and in case the drums programing by computer wouldn't be satisfying enough, there's also the eventuality that Vincent does effectively the job for the album... we'll see what happens but it should be amazing and assuredly TUMBLEWEED DEALER is a band to follow from NOW ON !!!