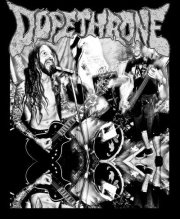 Even if released quickly after the band's formation, "demonsmoke" the first album of Montreal's trio DOPETHRONE had yet shown a serious potencial, but two years later, with a more than slightly developed sense of composition, "dark foil" has given naturally the band a new  status in the scene... Nothing "trendy" under the highlights, just a deep respect from the true underground, leading to the next Roadburn, which for a young unsigned band is a very nice recognition - and more locally certainly hailed as the natural leader that our cousins were expecting for a long while and all the better if they play some of the most sickest sludge/stoner/doom ever !!! Imagine the perfect cross between early Electric Wizard, Bongzilla and Weedeater, that's what you got here, the kind of band that you can't fully enjoy if you're clean !!! "dark foil" shows a great step towards something more of their own,thicker and more oppressive  too, with some of the most vicious vocals ever... Their smoky sound now well spreaded (but there's never enough, so if you haven't tasted it yet, check out their bandcamp page) and beautiful projects announced for 2012, it was time to ask Vincent (guit/voc) a few questions :

- Hail Vincent, you formed in 2008 and less than year after released "demonsmoke", what's your look on this first album now ?
Now that I sit down, drink a cold one and listen to our first album, I remember the haze of all the tasty smoke we inhaled in order to come up with that riffage.

“Demonsmoke” was recorded only 9 months after we started playing together, we were hanging out, getting ripped and we had access to a decent basement studio at Thom’s old place (our former drummer) so we decided to make this project “official”. But it was only the beginning, we were getting closer and closer to what was gonna become “our” sound.

- In my opinion, this first album was more crude, somekind of blackened stoner/doom, while "dark foil" eyes a lot more on sludge, the music is deeply enriched, thicker but also more sick, vicious and even if that was hardly possible more smoky... also I think you certainly improved a lot as musicians ! how do you see the evolution between both albums ?
With Demonsmoke, we were still figuring out what our sound was gonna be, it was kind of a experiment… but the response was great, and we were having fun, so we kept on givin’er.
So, after Thom left, we got a different drummer (Carl Borman). We also changed some of our gear. Let’s just say shit got pretty fucking crazy, (substance abuse & more) and we finally gave birth to Dark Foil.

- The original logo reminded the one of Venom... was it a wink or a reminiscence of some tastes for black metal stuff ? The new one looks better, more simple and sober, why did you change it ?
I drew that “Venom style” logo by hand because I really dig the style and when it comes to being in league with Satan, Venom has this “omnipresence” in people’s minds… Kind of like the Coca-Cola logo does… The main difference is that; unlike Dopethrone, Coca-Cola doesn’t turn your earwax into hash oil. 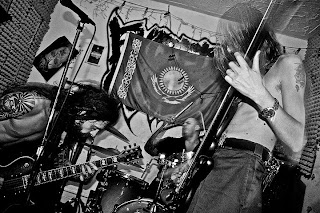 - While it has always provided quality death/thrash metal bands, the doom/stoner/sludge scene in Quebec seems pretty small... how do you explain this strange phenomenon ? Except Dopethrone, Cauchemar and Ensorcelor, is there any new bands to recommend ?

Well there isn’t much Doom sauce up here, except for maybe: Squalor, Stoned Horses & Downtrodden. I think the weather as lot to do with the whole “Heavy/Sludge” phenomenon, it’s way warmer down south and people tend to be more laid back.

- When I've been in Quebec a while ago, I noticed that you guys were very attached to the french language, even blaming us to use often anglicism... what's your opinion about that and does France represent something special for you ? do you feel more steeped by the North American or the French culture ?
Well, I don’t know who you met out here, but we don’t discriminate, we party in both languages… and we don’t blame anyone for using Anglicism… We are from North America. Our ancestors are lumberjacks that were having sex with hot native women.


Unless someone speaks the original language from the tribe this land was taken from, they have no right to blame people about what language they speak. 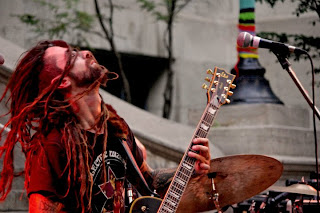 - You asked your fans ideas to give a name for your future european tour next year, so any good idea selected ? Could you tell more about these touring plans ? Knowing that Walter was in Montreal this summer, I feel there's a real possibility to see you guys playing at Roadburn, am I wrong ?!!! (this was sent just the day before the announcement...)
Yeah, ROADBURN is on the list!!!
We plan to do a small European tour so we can spread the demonic sludgy Dopethrone sickness around… We didn’t find the name of the tour yet, but we got a few good ideas from our fans.

Actually, no plan for a record deal so far… And… No link to the tour… Our stuff is 100% D.I.Y. and we intend to keep it that way and manage ourselves until we get a decent offer.


You're in a very productive state of mind musically, as material is ready for a 3rd album, will it be a logical following to "dark foil" or should we expect some special evolutions ?
We are almost finish writing the 3rd album, we might call it “Hooked”, but we are not completely sure yet. I think we found our sound with “Dark Foil” but the next album will be more violent/punishing and evil, some faster/more aggressive grooves. But don’t worry, a lot of slow thick riffage with drug-fueled bluesy leads also. We are also considering a stoner “Sitar” style intro.

- How did it come that you plan to cover the bluesy "graveyard train" from Creedence Clearwater Revival ? any special taste for this kind of stuff ? Will it be included to next album or for another release ?
Yeah the CCR cover will be included in the next album, We love that swamp music, because that and the blues are the true roots of sludge. 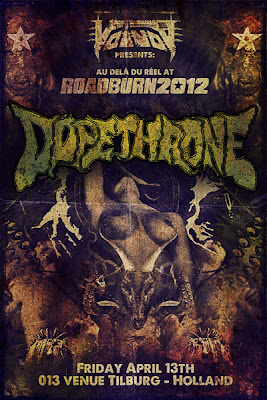 - I was pointing the rather unactive scene in Quebec for occult stoner/doom metal, but I know that France is neither a reference too, do you enjoy any french bands though ? Are you attracted by a scene in particular ? Could you please name your faves for 2011 ?
I can’t think of any heavy bands from France at the moment…
The New-Orleans sludge scene is definitely our favourite.

- On your FB page, there's very very nice photos taken recently at a rehearsal, those are in white&black which is pretty rare, was it your idea ?
Wasn’t my Idea, one of our friends from Pelecanus.net showed up with is camera at one of our rehearsals and he took those, he’s really fucking good.

- Well, thanx a lot cousin, add something if you want (I'm thinking especially about your awesome T-shirt !)...
Cheers to you my friend!
And yes, our new T-shirt is fucking evil as fuck, you can order the shirt and a copy of both CD’s at:
http://www.facebook.com/grandselmer?sk=wall#!/pages/Dopethrone/201732593171312
www.soundcentralstore.com
Check us out and listen/download our new CD for only 6$ at:
http://dopethrone.bandcamp.com/
Thanks & burn heavy)))
Posted by Unknown