There are (musical) events, meetings who leave their own special mark in life ... Sometimes nothing special happens during one or several years, but personnaly this year has been quite fruitful, 1st with  the memorable special show of Candlemass at Roadburn and then -this past sunday- with YOB coming in Paris...
A couple of hours before the gig, I've had the honour to speak during a long delightful moment with Mike Scheidt, leader of Oregon's masters YOB, and even if it was no surprise, I've felt something very special emanating from this guy; a very developed expression, quite and thoughtful, with simple, true, fair and essential values . Some people are maybe more accessible than me to YOB's philosophy but this shared moment and the gig right after helped me to DEFINITELY get into it, understand all his message and live at 101% his unique sonic odissey transcribing all his and our twisted emotions.


So, here's the first part of the interview I did with Mike (5 minutes),.. Don't blame my  zombiefied voice with this awful english accent but concentrate on interesting things this nice guy has to say !!!!
at the end of this part, we've been a bit disturbed by the parisian garbage collectors (!) put then the sound higher... we moved a bit and then continued during 25 minutes, that'll be the 2nd part which I'll post quickly, but as for now there's still some great news to hear about :

1st question is about the reasons that led the band to cancel the spring european tour and the headlining of Raodburn 2011... and then I asked if there's any hope for next edition in April 2012... he he !

2nd question is underlining that discussions often focus on Mike as the leader of YOB and his life philosophy, so that we don't know much about other member caracters,  so I wanted to know how the other members give their part of strength to YOB as a collective ...


The gig's report with photos : 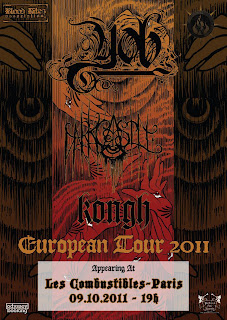 I was expecting a lot from this gig for a few months, listening so many many times yet to "ATMA" and re-plunging heavily into previous albums, certainly not that I had abandoned them, but I felt the need to prepare myself specially to this gig, like I did when I was a lot younger, conscientiously to carefully enjoy each moment and the strongest feelings possible...
Not just for me; indeed expectations were high for everyone but I can without any risk affirm that no person present has felt even the slightest disappointment, cause Mike and his buddies have completely blown away "les Combustibles", with an audience that ended the gig rinsed, washed and drained (the small hall was sold-out with around 160-170 people, during YOB's gig the ambient temperature has increased from at least 10°c degrees inside !) but so happy and aware to have experienced some unique moments, in an hypnotic transe that was just simply amazing ! 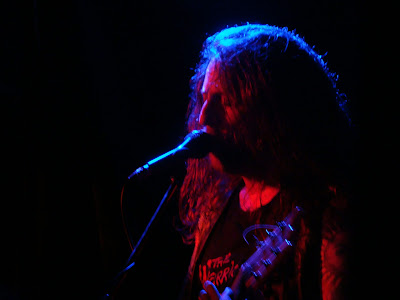 Prior to this magic hour, DARK CASTLE had already impressed with their shredding  sludge including a great dose of crushing doom and blackened post-HC insanity... Even if you already know it, that's pretty strange to have just drummer Rob Schafer and Stevie Floyd on vocals/guit occupying the scene; but the space is pretty small and their set is so fuzzy and extreme at the same time, that you forget quickly everything and get 100% completely in their dark, cold, funeral, extreme world of earth-shaking riffs... 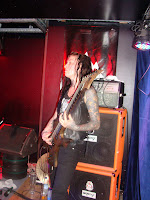 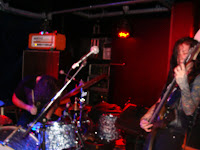 Most songs are naturally taken from the excellent "surrender to all life beyond form", including this awesome title track. Ambient, groovy, crushing, scary, possessed; lots of various components  that complete perfectly one with each others and form a very original style, a band that can now be considedred seriously as a precursor of some new extreme kind of music for the rest of this starting decade. 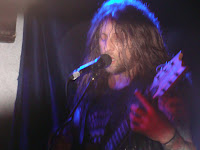 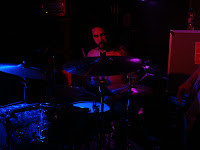 What's the ideal setlist of a YOB's show ? I think there's none actually, the repertory is now so wide and rich; Mike has picked up songs from the last four albums and everything is equally as good in heaviness, power and atmospheres ; could it be with "burning the altar", "quantum mystic", "grasping air", or more recent stuff with "Atma" and "prepare the ground"... It's not a problem of broken string on the 2nd song that can disturb the serenity of Mike and a 2nd set in row for Rob Schafer which can mitigate his enormous power. The audience is stunned by this constant massive and epic heaviness but -instead of undergoing and suffering from the more and more oppressive heat invading the hall- is constantly headbanging, hypnotically in a slow motion with a part of it collapsing in front of the scene like if carried away by a viciously surging wave. 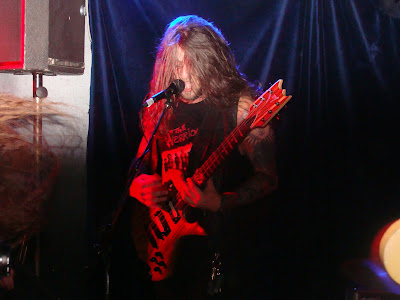 Too bad there's no encore but no one would have the idea to blame them, Rob seems exhausted and Mike in total trance... he  thanks warmly the fans, then sits down a few minutes on the left side of the scene, enjoying alone and peacefully the last moments of this memorable, authentic  communion... The set was totally grasping but this moment too believe me.
Thanx YOB for these great times, I'm already impatiently waiting to see you  again next spring around there guys...  And also a major thanx to Bloodrites association (Fernando and Maryline) and Stoned Gatherings (Mathieu) to have organized this event, all the best to you concerning the next future plans that should allow french doomsters to see top notch bands within the next months and (hopefully) years. 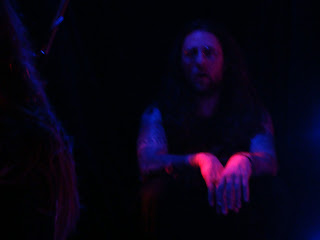