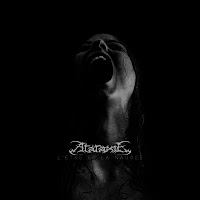 Five years after Anhedonie, the french quatuor (coming from Normandy)  is back with "L'Etre et la Nausée", their 3rd album  - still released via Weird Truth rds from Japan... For those not in the known, Ataraxie is currently one of the longest-running band coming out out of the french scene, with a strong and uncompromised identity, an undefectible love and support for the  true values of relentless death/doom - no place for romantic additional instrumentations , it's all about heaviness !
Despite a rather sporadical rhythm of releases (one of its explanation is that bassist-vocalist Jo and guitarist Fred are also parts of Funeralium) Ataraxie represents a  strong and very respected band of our scene and have had some great and regular Live exposures abroad throughout the years, so this new album was one of the most anticipated domestic  releases of 2013 and fuck it was worth the wait !

One thing that is  certain with Ataraxie is that in each album you'll get 5 songs, another thing that is cool (if not certain) is that from effort to effort the total duration expands and expands - to reach here 79 minutes; consider that the short breathy interlude "Etats d'Ame"  is just 3 mns long and you've got 4 dramatic pieces from 11 to 27 minutes long who push the band to new levels of darkness and despair...
Oh well, I should say in fact three songs most essentially -  as "Dread the Villains" is clearly different from the rest, for it is  a PURE Death Metal song (although 11 minutes is pretty long for the genre!) but you know, a song  with  that kind of downtuned beyond belief guitars - creating gloomy crushing atmospheres  in a basically fast, brutal and shredding up-tempo full of insanity, a fucking blast for sure !!!  Vocals are inhumanly low all along here, a feeling which Jo often gives but generally mixed with either despair, anguish or angriness... I wouldn't be surprised that the guys composed this one after seing both Incantation and Immolation (almost in a row)  last year at Motocultor festival, which was a pretty striking experience !!!

Taking things a bit more in order, the album starts with "Procession of the Insane Ones",  a typical song of the band with lots of contrasts, something which doesn't put the band in a specific subgenre like funeral or atmospheric, this is a rich, intense, dark and malevolent death/doom... one can could eventually add that it's closer to old-school than post-anything but that's all hahaha !!! Slow riffs, heavy as hell rythmic, dark grunts to agonizing screams,dense accelerations...  Ataraxie is not in rest at any moments to share its troubles !
This song makes a great part to relatively quieter  moments, cleaner in the tone and developping somber melodic harmonies but  this remains so dark, anguished and despaired that I'm definitely not sure that we can call those :"melancholic parts"-in any cases  they progress towards an abrasive end which prepares the ground for "Face the Loss of your Sanity", this one's said by the guys themselves to be maybe the most representative of the album,in the sense that it's certainly the heaviest, most brutal and darkest too ! Jo's vocals are more evocative than ever, I presume his experience in Funeralium has also helped him in Ataraxie and make him a true distinctive force of the band, just as the music is multi-layered in dark climates, he offers a wide variety of expressions, always dense, at times scary and tortured... some words screamed in french here and there are particularly freezing your blood !

Then what could you say about the 27 mns long closer "Nausée" except that we've got here an anthemic drama? starting in a slow as fuck manner, little by little - through the most sinister progression you could expect from your fave funeral Doom band, but more rich with various breaks and this often latent insanity, the atmosphere gets tensed, insane and angry - almost epic at 23:00 as if the guys were making sure to leave nobody alive on the field of their ennemies !!!
Just simply, this album places definitely the band at the pantheon of the genre along with Evoken, Disembowelment,Esoteric and eventually a couple of others from your choice... no ass-licking, I tell ya Ataraxie became definitely a reference and this new album is one of the true masterpieces of the year !