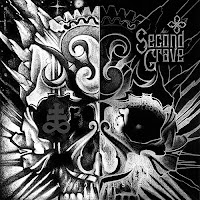 Their debut EP from 2012 was already a nice treat, and hearing the follow up "Antithesis" now, you think it's high time that Second Grave come up with a full album, which will hopefully display the same quality and versatility that these two songs show.

Opener "Mourning Light" starts out quite fast and with a somewhat uplifting mood, albeit elusive, for both Krista Van Guilder's lyrics and voice convey the wistfulness you might expect from an outfit deeply rooted in doom 'n' gloom.

That said, don't take Second Grave for scenesters that want to belong somewhere first and let the music speak secondly. Otherwise, Revelation's John Brenner would not have taken on mastering duties, so you might easily say that the group would fit the roster of Bland Hand Records just as well.

Back to business: Given that the a-side is very Metal in a traditional NWoBHM-sense, consider the eleven minutes of "Drink The Water" a slower, but not less intense counterpart. Dealing with the ever-present topic of war, this epic is by no means less melodic, especially because Van Guilder seems to have put more focus on her vocals, or at least they are highlighted properly on this wax.

Be it as it may, if you pass on listening to also-rans in an environment that gets more and more crowded by leeches and their insubstantial efforts at playing power chords, Second Grave are a treat for you and balm to your ears. Thank you.

the 10” EP vynil will be limited to 500 copies (housed in a striking sleeve designed by Cory John Heisson) and is scheduled for release on 31st October 2013 via Pariah Child rds...