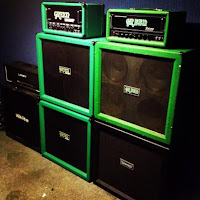 Whatever might think a part of the french scene, by jealousy or  lack of discernment, by sympathy or perceptiveness (depending on the camp you choose), CULT OF OCCULT is THE french revelation of 2012 (along with HUATA but to me those were more on the 2011 millesime, it's just that their album took a long while to came out)... Provocative and not original at all for some, terribly infectious and immensely  heavy  for others, those nasty guys are perfectly in phase with their time and the actual tendencies towards vicious and blackened variations of Sludge/Doom.
One important aspect also is that they know how to make the buzz on their name with an efficient and devilisly malicious way of communication; original or not is not the problem for me, I do like their sound simply, without any second thought and have much respect for what they already did in just about one year...
C.O.O.  entered the studio again this summer for what is gonna be their 1st full length album afer a nice introductive mini album as debut and judging by both songs below the band deliberately hammers it in !
First by the duration of the songs which last averagely about 14-15 minutes, but also with a neat development in heaviness and deepness while being always very heady.... though don't expect much variations, melodies or whatever, it's just more crushing !
There's a real work on the moods, more frightening and heady, pushed in their most sensible extremities...
slightly less filthy to my ears (though still far more than 95% the actual Sludge bands !) but way more heavy and infectious than their early days; yes that's possible and this fuckin' rules .
I don't pretend, neither do they, that this band reinvented the wheel, but fuck NO these guys aren't in my opinion just simple amp-worshippers too influenced by Weedeater and Bongripper, this album will definitely prove it muthas ;)

The whole album will be available on STREAMING in November and at this occasion 5 codes will be given for immediate exclusive download , watch out for this sickos !!! The band is actually looking for a label to release "HIC EST DOMUS DIABOLI", so I think a physical release should not be expected before the first months of 2013...

New shirts are available from their bigcartel while the Hammerheart special vynil and Cd editions are of course still available too... http://cultofoccult.bigcartel.com/