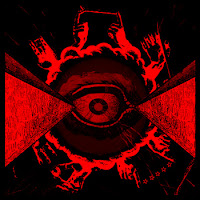 The odious, ensludgeoned doom leviathan, Tentacle, has finally resurfaced with the follow-up to their excellent 2012 EP, ‘Void Abyss’.With the release of their new full-length, ‘Ingot Eye’, the Boston trio seems to have resumed their voyage of exploring the dark and malevolent waters of hypnotic, horror-imbued doom that could herald the abominable second coming of the Great Old Ones. With only four songs and a runtime of near forty minutes ‘Ingot Eye’ is an onslaught of oppressively heavy riffs and tortured vocals that hinges on the bombardment of repetition to produce a euphoric, drone-like stupor.
The menacing album-opener, “The Blackness of My Soul Will Be So Great as to Make the Night Weep”, takes what the band did so well on their debut and somehow manages to make it more grim and desperate. While droning repetition creates a foreboding atmosphere throughout both of Tentacle’s releases the band has ensorcelled ‘Ingot Eye’ with an influx of subtle musical embellishments and a greater vocal variation that effortlessly runs the gamut from distressed wails to malignant roars. The second track, “Dull Ache (I Hate Myself Today)”, slightly deviates from the acerbic, preternatural doom of ‘Void Abyss’ and comes across as one of the darker tunes from Ice Dragon’s ‘Tome of the Future Ancients’. “Dull Ache (I Hate Myself Today)” features a relatively more subdued vocal delivery—thus the Ice Dragon comparison—but the song is dosed with otherworldly psychedelic nuances that can only be summoned from the deep under the Tentacle moniker.

“(Revenge) Dust For Blood”, the longest track of the album at nearly thirteen minutes in length, is an unholy, shambling beast of a tune that plunges back into the murky waters of despair that typifies the Tentacle of ‘Void Abyss’. Like the album-opener, “(Revenge) Dust For Blood” features a great deal of variety in terms of vocals. Throughout the track singer Ron Rochondo alternates between his characteristic howls to a chant-like urgency and even clean vocals. The final track, “Our Serpent Mother’s Kiss”, begins with a brief audio collage that recalls Skinny Puppy at their most surreal and abstract. Initially, “Our Serpent Mother’s Kiss” strikes the same chord as “Alone In My Grave” from the band’s debut, mostly due to the main riff, but ultimately the song staggers forth at a wounded trot.

Like its predecessor, ‘Ingot Eye’ is a murky collection of affectively loathsome tunes fit for probing the darkest recesses of the imagination. Tentacle’s latest is the musical equivalent of a great horror story or film. The band has an uncanny ability—not just with their Tentacle incarnation—to assume a collective persona and produce albums that are atmospheric, cohesive, and singular in vision without sacrificing quality. With any luck ‘Ingot Eye’ will see a physical release, even if it’s a limited run of CD-Rs like ‘Void Abyss’.If that’s the case, hopefully there will be another hidden gem lurking just under the surface.