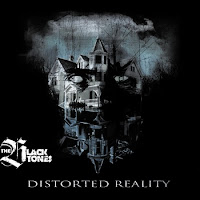 "Distorted Reality" is the 1st EP from The Blacktones, a young quatuor coming from Cagliari (Italy)... 5 songs for a total lenght of less than 20 minutes, understand you've got here something pretty straight without any psychedelic edge, long instrumental parts or anything else that can seriously extend a song duration.
The guys label themselves as Alternative Metal, I don't know what does this exactly recover but one can recognize quite easily some influences in american bands of the 90's again (Alice in Chains, QOTSA, Kyuss, Down...), so this label must be ok...
Without being fuzzy and crushing, guitars steadily remain massive and heavy; there's solid and catchy riffage in general but I think they're more distinctive on mid-tempos with a somber approach ("the Last Time", "the Phoenix") than on more straight down-tuned rock'n roll stuff - despite some nice southern blues tinged riffs.
Vocals by Simone Utzeri leave me mixed feelings, globally catchy and nicely in harmony with the music, they suffer from a rather average accent- something which is often a problem for people with latin origins; it has its charm at times but at others seems limited and without relief. He's far more at ease when the tempo is dark and menacing, with a  commanding and almost devilishly bewitching singing but is a bit laborious when it comes to more swinging or groovier tones.
Interesting but not memorable yet as a Cultura Tres for example (who - in several moments - could be a more underground and modern point of comparison) that's how we could sum-up this debut release of The Blacktones; aged of just one year when this has been recorded, the band show obvious potencial but still needs to find their definitive and more crafted identity to make their place in the scene.