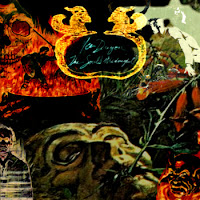 The doomed-out dabblers of supreme skull-fuckery, Ice Dragon, have made their first offering of 2013—presumably/hopefully the first of many—a four song EP that in its earliest incarnations yielded both “drunk” and “high” versions of the title track. ‘The Soul’s Midnight’ finds the three-piece mining the morose, down-tempo landscapes of ‘greyblackfalconhawk’ but without the overarching drone influences. Like the rest of the band’s releases ‘The Soul’s Midnight’ is its own beast, yet the end result is irrefutably the product of the ever-evolving Ice Dragon.

A writhing bass line carries the weight of lead track “The Soul’s Midnight” of which the final mix is rumored to be the “really really high” version. A sinister, forlorn vibe permeates the track as it marches forward. While the opener relies heavily on repetition there are enough subtle nuance that keep the track interesting, particularly near the three minute mark where the song momentarily deconstructs before quickly reconstituting awash in eerie synths. The second track, “Understanding Ouroboros”, kicks off at a galloping pace and builds in intensity before the bottom falls out and the listener plummets into the depths of paranoia. “Stellar Door”, is an ambient piece of rolling synth waves that, at times, recalls Lalo Schifrin’s film score to THX-1138. It’s cold, desolate, and thematically right at home amongst the four tracks of the EP. At ten minutes in length “Winterwind” closes out the collection. The first half of the track is a mellow, reverb heavy meditation that musically calls to mind the band’s goth-rock project, Slow Heart. “Winterwind” slithers forward while almost imperceptibly increasing in severity until eventually escalating into a mid-paced stomping rhythm.

Ice Dragon’s ‘The Soul’s Midnight’ is a moody, somber affair that finds the band, once again, indulging their whims and journeying into unexpected sonic territories. The band continues to astonish not only with the quantity of the music that they are able to produce, but also with the quality of the tunes. If anything it is the band’s sheer love of music, among other artistic forms, that comes across in their recordings. ‘The Soul’s Midnight’ can momentarily stave off the dysphoria—a symptom created by the band’s prolific nature—that is associated with waiting for the next Ice Dragon release or material from the many associated off-shoots.