…no idol will stand before me: THE GATES OF SLUMBER – ‘Stormcrow’ EP 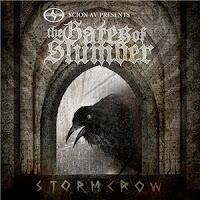 Indiana’s standard-bearers of true doom, The Gates of Slumber, have finally unearthed the follow-up to 2011’s excellent full-length ‘The Wretch’ in the form of a 5 song EP, ‘Stormcrow’. Many considered ‘The Wretch’ to have been a return to form after the stylistic departure that was the heavily NWOBHM influenced ‘Hymns of Blood and Thunder’. Even though ‘Hymns of Blood and Thunder’ is an admirable hit-and-miss anomaly amongst the band’s discography, ‘The Wretch’ still found the three-piece experimenting with their sound, but more comfortably within their established sonic range. The result was a crushing—and at times spacey—slab of traditional doom that proved to be one of the year’s best releases. ‘Stormcrow’ finds that band devolving even further into a no frills, less-is-more, primitive approach where tuning down, dooming out, and solid-as-hell songwriting is enough to stave in the skull of the unwary.

While it’s difficult to top the stoner groove and acid-tinged leads of the band’s debut, ‘…The Awakening’, or the epic, Saint Vitus influenced ‘The Wretch’, The Gates of Slumber come commendably close with‘Stormcrow’. The EP opens with “Death March”, a tune that perfectly encapsulates the essence of modern traditional doom as it shambles forward like a mortally wounded mammoth that is mercilessly prodded forward by the thundering percussion of multi-instrumentalist “Iron” Bob Fouts who makes a welcome return behind the kit. “Death March”, despite its lumbering doom grait, is offset by some of Karl Simon’s most memorable lead guitar playing which really soars on this track. The thunderous, hard-hitting drumming of Fouts introduces and sets the pace for “(Devil’s Grip) Driven Insane”, a tune that would have fit comfortably among the nine tracks of ‘The Wretch’. This second track seems to unite the best of Iommi and Chandler groove with Simon’s gravelly, commanding vocals which chronicle a descent into paranoia and madness.


“Son of Hades” marks the midway point of the EP and seems to recapture the essence of the Robert E. Howard influenced barbarism that seemed to bleed from the band’s first three full-length releases. “Dragon Caravan”,like “Son of Hades”, could very well have been crafted by pre-‘Hymns of Blood and Thunder’ era The Gates of Slumber. While these two tracks seem like a throwback to The Gates of Slumber of old, they aren’t merely reworked ideas or formulated from recycled riffs, but rather from the band sticking to what they do best—penning great tracks and delivering some of the finest traditional doom. The EP closes out with “Of That Which Can Never Be”, a solemn, plodding dirge about succumbing to futility. While it’s not the most immediate track of the EP, it’s worth it in the end as the noise issuing forth from Simon’s guitar and Fouts’drumming close out the album in forlorn and hypnotic fashion.

‘Stormcrow’, if nothing else, proves that The Gates of Slumber are one of the most consistent and unwavering acts out there today. The trio’s brand of working man’s doom is as solid as anything the band has produced up to this point and showcases the songwriting of Karl Simon and Jason McCash. The Gates of Slumber have yet to release a bad or lackluster album and‘Stromcrow’ is evidence that the band’s best days are not behind them. The EP is available as free download through the curious Scion A/V label, or on compact disc from the band’s website as a bonus for ordering merch.