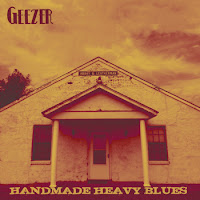 In the fall of 2010, recent Brooklyn transplants to Kingston, Pat Harrington and Chris Turco, started to get together for some loose jams. Upon meeting each other earlier that summer, they realized quickly that they had the same musical influences and approach, it was only a matter of time before Turco’s drums made it into Pat’s basement… Harnessing their familiar background of classic rock, hardcore and heavy metal; throw in Pat’s new found affinity for pre-war slide-guitar blues and Geezer was born. Once the songs started to take shape, Freddy Villano was brought in to bring the monster low-end bass that he is known for.
Best described as ‘Heavy Blues’, Pat says of Geezer’s approach, “We just wanted to bring the evil back to the blues, the devil’s music! Somehow the blues got co-opted by hippies and jam bands and made it all nice and fluffy, we’re here to change that!”

"Handmade Heavy Blues" is an aptly entitled album, filled with 10 burning songs that oozes authentic, nasty, BLUESy rock'n roll with a real HEAVY touch... not to hard to get into, even if still more varied and audacious than your typical Zeppelin and Hendrix clones, this is dusty and swampy too, which makes those 40 minutes a truly amazing experience !!!

It's only available digitally as for now (name your price-affair !), but the band's actually working on a limited edition of 200 CDs and also is  looking for a good deal to release it on Vynil, so if you or one of your friends can help out in any way, spread the word and/or contact them !!!