down among the dead men : MARCHE FUNEBRE "To Drown" 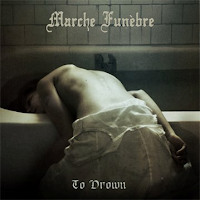 According to various rumours, Doom/Death is all the trend nowadays, with every band bandwagonning on the subgenre. Well, a quick look at what the Doom festivals have offered us the past 4 to 5 years seems to contradict this, and I think that the rumour mill seems to have forgotten that we're in 2012 and not in 1996. Which is exactly the period to which this first album of the belgian band Marche Funèbre brings us. Back in the 90's that when someone was telling you 'yeah man, I'm listening to some Doom' he was talking about My Dying Bride and not Count Raven. The 90's saw the rise of the UK Doom/Death giants, and also of the much loved dutch scene. Spina Bifida, Officium Triste, early Celestial Season, The Gathering or Orphanage were the continental bands that fanzines were talking about. And Marche Funèbre does a great job in resurrecting those lost days.

But they could just be another name in the too long list of My Dying Bride/Novembers Doom copycats, if this wasn't for a curious twist. For Marche Funèbre seems to like all sorts of different subgenres of Doom, and they want to mix it in a single song. Most notably, they never hesitate to wander from old school Doom/Death to the more melodic side of the genre, and even in Epic Doom territories (there's more than once a big nod to Candlemass)...ore pure Death Metal (the speed parts). All this, in a single song. For the un-initiated, this could create some headaches. There's even some hints of Black Metal and a somewhat surprise for me. For when vocalist Arne Vandenhoeck sings in clean voices, he sounds a lot like Jérôme Deves from that old french band Forest Of Souls (if you don't know this cult band, now here's the time for you to go look for them). And this is where he's the best, for his aggressive vocals are good but more than once not corresponding to what he's singing (sorry, but aggressive vocals when declaming a very mournful story is NOT a good idea).

However, the band seems to prefer to separate the various elements that compose its music, rather than trying to fuse them together and create something original. This is epitomized in the song 'The Dark Corner' : a slow mournful start, giving way to a fast aggressive section before coming back to a slow mournful finale. In this song, and the final 18 minutes epic adapatation of 'Lethe' (a poem by french dark romantic Charles Baudelaire), the way Marche Funèbre handle every different parts truly shine. Such is not the case with the rest of the album, that seems to be stuck betweeen two doors.


Theorically, « To Drown » has everything needed to be a great first album, except focus. The members really know how to handle their instruments (so many musicians still thinks that Doom doesn't need a lot of technique to be played...Guys, if you want to play this way, then go cover the Ramones instead) and they have a lot of ideas coming in. The potential is huge for the band, should they manage to focus a bit more in fusing the disparate elements together and correctly put the different types of vocals where the lyrics needs them the most. This is a solid debut album, that falls short on being a truly awesome one. But what's more interesting is that it leaves plenty of possibilities for future ameliorations. And I'm looking forward to hear more from them and see which road they shall take in their future releases.