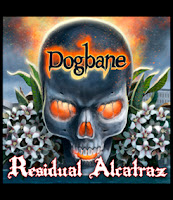 This quintet from North Carolina, consisting in Jeff Neal (vocals), Mitch Allred ( guit), David Ellenburg (guit), Kevin Davis (bass) and Jerry Cloer (drums), formed in Summer 2011 and already released a 1st album... but this is everything except a band of young unexperimented metallers or hipsters, judge : they represent a combined ninety-four years of experience and a collective discography which spans over twenty-eight recordings (from various bands into Rock, Punk, Grind, and Metal like Unsettled, Society's Burden, Deceiver, Rictus Grin, etc...), pretty impressive statistics !
And believe me, this, you can attest after just a few seconds playing  "Residual Alcatraz" recently released on Heaven and Hell rds !!! Firmly rooted in old school Heavy/Doom Metal, DOGBANE takes as much influences in Judas Priest, Iron Maiden, than in Candlemass, Pentagram or Trouble, giving to their style a pronouced early 80's edge (including in the production by themselves, while the mastering has been done by Gary Long who worked for King Diamond and Solitude Aeternus among others). This should obviously suit to old metallers, in their forty years (just like me), who came to Heavy sounds when "killers","british steel" or "the skull" were released more or less 30 years ago, but not only to them of course ...
I think this is basically Classic DOOM Metal, numerous mega riffs remind it enough often, but always highly melodic and incisive, even sometimes explosive in the pure NWOBHM vein with typcial duo of guitars and hammering drums.
As you can imagine, Vocals are very powerful and melodic, maybe more slightly but there's that duality of styles too with tones eyeing on Rob Halford in his late 70's/early 80's period and with a nice doomier flavour à la Johan Langquist on Candlemass 1st album... I dig them, so warm, catchy and melodic at the same time.
DOGBANE didn't invent anything, how could they when playing such type of music ? This is not their intention at all, no these guys apply here, simply and humbly, the good old Metal recipes that they heard when they were kids/adolescents 30 years ago.Their experience, tightness and you know that palpably pleasure taken, allow them to master perfectly the subject ; so if you like it HEAVY, POWERFUL and MELODIC, enjoy and support them ! 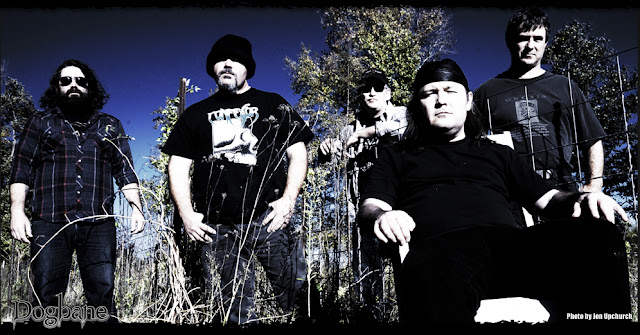