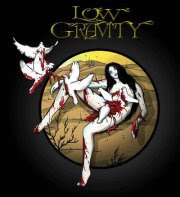 After the excellent In The Company Of Serpents and Stoic Dissension, here we have another promising band from Denver (Colorado), LOW GRAVITY present here a  very solid self-financed debut album that contains 6 songs for about 45 minutes. In this, it yet clearly shows a neat evolution towards their debut ep released one year and a half ago, 5 of those 6 songs last around 8 minutes where on the Ep it was more an average of 4 minutes !!!
It's great to see that those guys have manifestly had a serious reflection towards their identity and sound's evolution, in such a way that they  left a great part of their too obvious KYUSS influences... Indeed the songs are much longer, maybe not as warm  and assuredly not as straight, but thicker and as groovy,  in the vein of the likes of HIGH ON FIRE, BARONESS and KYLESA; it's a fact that the influences shown are different but most essentially they are far more digested and the overall is consistently enriched in refined but very heavy textures.
While there's still a large place given to monster Riffs and catchy melodies ("Satellite", "27 Names", "Deathug")  the songs are generally all based on incisive mid-tempos, always powerful with frequent heady moods revealing an enough pronounced emphasis on a nice sleazy Sludge tone to their corrosive Stoner Metal, especially through a hammering rythmic and angrier vocals... Talking about them, I think they are perfectly mastered in a powerful and gnarly tone,  but slightly less angry than previously.
LOW GRAVITY didn't invent anything special but what they do they do it with talent, devotion and a fresh sense of humor, essential components for some guarenteed great moments that this "Incarnadine" will provide you successfully...