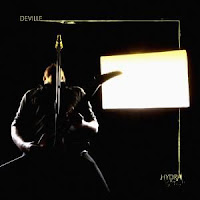 You immediately hear that these Swedes have been around for ten years now: DEVILLE play no-frills Rock music with obvious influences, but write proper, diverse songs instead of indulging in sluggish riffs and singing that knows no tonal range.
On their new album, the repertoire ranges from all-out Stoner-stuff like the opening tune or "Over The Edge" across compositions that live up to the best Helmet did in their heydays ("In Vain") to more metallic elements, manifest in "Burning Towers", for example, and the production in general.
Other highlights are the sombre instrumentals "The Knife" and "Battles Will Be Born" as well as "Iron Fed", which reminds of pre-Solace-group Godspeed, plus the occasional nods towards Josh Homme's work, most noticeable in the plodding passages of "Let It Go". With "Imperial", the band has also delivered a small epic with soulful soloing towards the end whereas elsewhere, they strive for a very compact sound.
In its broad range and modern tinge, this is actually what you want to hear in 2013, no strained vintage-isms with which other bands try to gloss over their inability to come up with something interesting. Mind you, Deville aren't revolutionary either, but they have the singer (Bengtsson knows how to write vocal melodies) and songwriting capabilities above par.