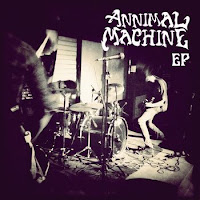 Out from Mexico here's Annimal Machine, a power-trio who formed about two years ago and released last September its first record in the form of a 3 songs EP. The music is up-tempo Stoner, pretty raw and straight but finely ploding and not without gloomier soundscapes.

Even if their approach is more Metal, the massive and percussive wall of sound added to the harsh vocal tone forming the 1st song "Condenado" could make think at first of another basic addition to the more or less typical south american sound of punkish Stoner Rock and then you wonder what's gonna happen next within such long songs (from 8 to 10 minutes)...!?
Yet, with a very good production, thick and powerful, plus a tempo which slows down a bit to crush viciously your soul and make you hypnotically headbang, before ending with a new serie of uppercuts in your stomach, you discover a band that can stand comparison over time !
Still pretty simple in its composition "a Fistful of Dollars" has a well-rounded atmosphere, around an infectious mid-tempo, there's a real tension with a killer haunting riff and bleak vocals that are more commanding. Again, the song flows easily in time and you're almost surprised to arrive so quickly at 9:46 !!!
I won't be so enthusiast towards the last song "Rage" which is definitely average, based on an ordinarily crude mid-tempo, it ends in a sludgy maelstrom  but doesn't include any hooky riffs, neither are the vocals as good as previously.
Well, nothing too serious, the band has shown enough good things on both first songs with a solid form of Stoner Metal that will for sure not make a revolution in the genre but deserves to be authentic and full of  sharped heavy power.
Now, let's see what the future will bring from them, certainly an interesting full-length album later this year !? meanwhile get that EP for FREE on bandcamp...