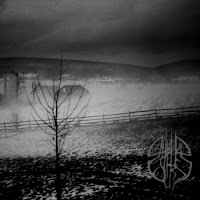 Obviously they are not the first underground band from Maryland that doesn't play Doom/Heavy Rock but this is the 1st coming out of this state, more usually known for bluesier more rockin' sounds, from a (very) different genre featured in here !!! And damn, they're pretty good in what they do : an uncompromised mix of crusty HC/Grind with Black Metal and  Sludge hints !!!

While being slightly muddy, the rather long instrumental introduction sounds clearly like the cleanest part of this record with its piercing and sludgey post-HC mood, no doubt the sickest is to come... and indeed, violence raises gradually and radically in intensity with "Cowards of the New Age" and then turns into a chaotic outburst until the end... but not only , hehehe ! there's a good proportion of dark, resonant sounds that present real compositional skills and this makes it catchy in my opinion.


"Spiritual Aim" and "Bleached" are the roughest interpretations that legitimate the Grind label, but not the kind of noise stuff with very short songs, minimalistic structures and variation in the tempos, more the loud and tortured HC/Crust  vein which has absolutely nothing crippling at all, on the contrary, it's cool to listen sometimes that kind of brutal stuff and if it's delivered with a harsh blackened sound, that's even better...

The highlight of the EP is "Relapse/Reward", the change between the  slow and  sludgey riffs of the first part with throaty vocals and then the fast northern blast-beats which follow, very aggressive and malignant, is bombastic and it even ends with a twisted thrashy riffing that could  remind early Voivod ... tasty !!!


"Dug Up,  which is the 6th and last,  is another song that clocks at a bit more than 3 minutes (the whole EP lasts 15 mns), following a churning monolith of riff, there's here certainly the blackest with everything full of anger, save the mid-part with a bleak atmosphere - again welcome in such painful fury.

Sure SLOTH HERDER is before all for people who like their stuff straight, raw and brutal with a special filthy and somewhat misanthropic blackened touch but  the songs are diverse, blending lots of styles with great hard-hitting riffs, and  an effective way of making dynamic shift that always keep the listener interested and should help them to find fans beyond the grind/Hc and Black Metal spheres with this ripping "Abandon Pop Sensibility".