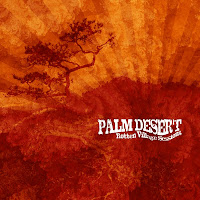 I took a walk in the forest the other day. It was nice with all the newly fallen snow, but it was damn cold too. Then I remembered I had the new Palm Desert album Rotten Village Sessions, which I was supposed to review anyway, on my mp3 player and I decided to give it a first listen and hoped it would infuse some hot desert sun through my ears into my body.

It did more than that. It sent me on a journey through the desert – a journey in three stages with two short instrumental tracks to mark the transition into the respective next stage.

With Down The Odyssey and Till The Sun Goes Down the journey starts on some heavy but powerful machine that takes some time till it’s rolling down the road gaining smokey and psychedelic atmosphere. The first instrumental Ghulassa Saloon is a drum/percussion tribal rhythm that sounds like the welcoming tune of the desert and its creatures. The next song Mani picks up this tribal rhythm and weaves a thicker texture around it with stomping and driving guitar and bass sounds . With Shades In Black the desert unfolds its psychedelic forces on my mind with a somewhat dark atmosphere driving fast into a psychedelic freak-out. Orbitean then, the next instrumental track marks the beginning of the last stage – again the percussive tribal sounds – time to go back home. Acid Phantom is still psyched and stoned from the deserts flimmery smokey heat, a bluesy progressive “hendrixy” jam with a heavenly driving bass and drum work (does it show that this is my favorite track?). White Wolf now takes me home again, a long way to go, with 12:55 minutes it’s the longest track of the album, the right length to remember and re-live the trip that ends with a nice, peaceful fuzz-free and sober acoustic guitar part.

Rotten Village Sessions (2013) is the 4th release of the 4 piece stoner rock band Palm Desert from Wroclaw/Poland. It consists of 9 tracks with a playing time of short of 48 minutes.

Well written songs, all with a dynamic structure a lot of rocking and rolling, going psychedelic, progressive, fuzzy and smokey - everything’s here what a good stoner rock album should have. And there are some details that make it an excellent one – well skilled musicians that are able to play off each other, each song is unique and diverse, the fact that it’s able to induce images and stories in my mind … and hey it works as a one finger salute to the freezing cold.