... Into the circle I wander : GALLOW GOD "The Veneration of Serpents" 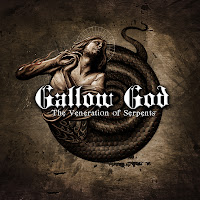 London, England’s Gallow God occupies that realm of majestic, emotive doom which is shared by the likes of Procession, Griftegård, Warning, and Pallbearer. With a runtime pushing near the 70 minute mark the eight tracks of the band’s debut full-length, ‘The Veneration of Serpents’, is a sweeping collection of immersive, soul-crushing doom punctuated with moments of calm, melancholic beauty. Though it’s been nearly three years since the release of the band’s impressive debut EP, ‘False Mystical Prose’, Gallow God seem to have further developed and fine-tuned their glacial paced sound before propelling it once again into the sublunary sphere.

Opener “The Circle” is easily the most immediate and rewarding song of the album due in large part to its heavily distorted sluggish groove and the vocal melodies of singer/guitarist Dan Tibbals whose voice, at times, resembles ‘Children of Doom’ era Chritus Linderson. “The Circle” is a solid introduction to the arcana of ‘The Veneration of Serpents’ and is, for many of the subsequent songs, a difficult track to follow. “Waters of Death, Thy Hands will not Cleanse” is a brooding, somber tune that utilizes space and quieter passages, but doesn’t ultimately abandon loud, heavy moments. The instrumental passage in the latter half of the song highlights the rhythm section particularly the double bass drum kicks add thundering depth and variety to the doom and gloom (this really has to be underlined because G.G. faced serious line-up problems over the past months; indeed, bassist Mitch Barrett had left the band for this album and only played on The Circle. Also Dan done 98% of drums and shared bass on the rest with Riccardo (guit)!!!).

“At Eternity’s Gate”—perhaps the most Warning sounding track due to its cadence and lead guitar—is held aloft by Tibbals who delivers his most impressive vocal performance of the album. It’s heartfelt and pleadingly forlorn. The album’s namesake, “The Veneration of Serpents”, rivals “The Circle” as a standout track of the album and again spotlights the rhythm section who drive the song forward to converge with the catchiest chorus of the album.

The second half of the album opens with “A Miser’s Land” and is the first track that really begins to test the listener’s fortitude. While “A Miser’s Land” is by no means weak, it is a dirge-like crawl that lacks any of the hooks or tempo changes that made the first half of the album so engaging. This lack of hooks, coupled with the lengthy runtime of the track makes for an arduous detour. As if sensing something is amiss, Gallow God throws the listener a curveball by unleashing their rendition of the traditional ballad “Scarborough Fair” and they simply kill it. It’s appropriately heavy while still remaining faithful to the spirit of the classic ballad. “Gaslight” almost succumbs to the same fate of “A Miser’s Land”, but the song plays with tempo and effectively weaves its sluggish plod with lead guitar driven passages. The album closes out with “The Cranes of Ibycus” which tells of the fate of the ancient Greek poet and the cranes that caused his murderers to inform on themselves. The themes of this final track suit the band’s ability to craft beautifully despondent tunes.

While the first half of ‘The Veneration of Serpents’ is arguably stronger and more memorable, the entire album flows with continuity and singular purpose. The band is in elite company with their ability to compose heavy, yet emotional tunes that can have a visceral effect upon the listener. Fans of traditional doom or the band’s earlier work will find a lot to like in ‘The Veneration of Serpents’. Welcome to one of the first great albums of 2013.
("Hopefully end of January G.G. will have Cd available. Downloads will prob be available mid January".)