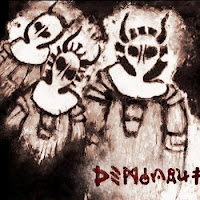 Combining the freak-out fuzz of ‘Locust Abortion Technician’ era Butthole Surfers with a hearty dose of mid-to-late period Melvins (minus the self-indulgent experimentation of either band) only begins to describe the sound of Atlanta, Georgia’s Demonaut. Add to this winning combination an additional bass player and an inclination for crafting indelible hooks and the picture, though obscured by a dense fog of dope smoke, becomes a bit clearer. With shared vocal duties amongst the two bass players and lone guitarist, Demonaut’s unique approach allows them to, in their own words “…create a doom sound that is thick and covers a wide frequency range (super lows-mids-high)”. The six songs that comprise Demonaut’s eponymous debut are collectively a leaden slab of nod-inducing, stoner-doom perfection.

Screeching feedback and impenetrable fuzz announce album opener “Woman in White”, a tune that, through its production, indeed covers the super lows-mids-high frequency range that Demonaut strives for. “Falling Into Hell”, a track that is most reminiscent of Big Business era Melvins, mainly due to the vocals, is easily the catchiest jam to be found on the album. “Pretty Little Lamb” amps things up and is one of the more frantic tunes until, apparently, the blotter kicks in. Demonaut, on the drop of a dime, slows things down by beginning their ascent into the stratosphere before ultimately plummeting back to Earth and the quickened pace that started it all. “Fallen/Risen” simply brings the heaviness, doom and stoned-out psychedelia that could also be found on any Slomatics release. The fourth track, “Waterway”, continues the brooding heaviness of “Fallen/Risen” but sporadically interjects a fuzz-driven instrumental hook throughout the tune. “Battle Caravan”, the longest track of the collection begins with brief call-and-response riffing before launching into another upbeat tune akin to “Pretty Little Lamb” before closing out with an extended, slow-paced groove.

While listening to Demonaut’s debut it is impossible not to recall bands such as Big Business, Slomatics, Red Fang or, especially, the Melvins. But within that school of heavy stoner metal Demonaut are unique enough to stand on their own despite drawing comparisons. The production of this debut album is perfect for Demonaut’s brand of thick, trippy metal by accenting the dual low-end attack, but still maintaining the clarity for the drums to pop and the guitar squall to shine. While this debut straddles the EP mark, the six songs collected here contain an amazing depth and variety that is often missing from a debut. Whether or not the band has something in the works for 2013 is unknown, but one thing is certain: Demonaut fucking deliver.