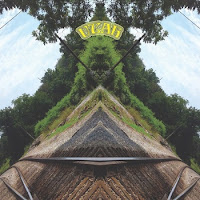 Sludge imbued psych-rock is the name of the game for Athens, Georgia’s Utah. With a slight lineup change and a shift from the two-piece drum and guitar juggernaut that recorded the ‘Here They Come’ EP to a more traditional four-piece set-up for the release of their self-titled, full-length debut, Utah has surpassed their initial offering with a collection of tunes that are stronger, heavier, and laced with a considerable amount of psychedelia and downtrodden hypnotism. The closest point of reference for Utah’s brand of sludge rock can be traced back to the now defunct, ill-fated noise merchants Karp, though Utah embrace an overall sound more in tune with rock and blues rather than the 90’s noise fueled metal of ‘Mustaches Wild’ or ‘Suplex’.

Two of the defining characteristics to be found among the collection of nine tracks that comprise ‘Utah’ are the variety of tempo changes amongst the songs and the gritty, rough-hewn tone that permeates each and every track of the album. The album opener and a debut EP carryover, “Bisontennial”, and the following track, “Chickamauga”, are both up-tempo rockers with no shortage of twists and turns. “Bisontennial”—at times the most Karp-like track of the album—stands out with its sporadic squeals of feedback and drowsy, stoned lead guitar. Whereas “Bisontennial” hits the pipe and delves straight into stoner-metal territory, “Chickamauga” goes for the blotter and ultimately devolves into a lethargic, effects pedal freak-out. The combination of these two tracks is a great fucking way to open an album.

While Utah has a penchant for crafting catchy, up-tempo slabs of stoner-metal, they certainly aren’t confined to any formula. The third track, “Ambian”, is one of the most interesting tunes of the album mostly due to an extended, drowsily reverbed “Old West” flavored intro that gives way to a shambling, doom metal plod. “Help” finds the band further experimenting with doom and adding their own twisted atmospherics aided in large part by sinister sounding drums. “Kneecaps” marks the midpoint of the album and the tune is carried by the vocal melody of the chorus alone. While “Kneecaps” is far from sounding “soft” or “light”—though it does close out with a lone acoustic guitar—it comes across as one of the more heartfelt tracks of the album.

Utah’s self-titled debut requires repeated listens to fully appreciate the band’s subtle experimentations. The use of synthesizer at the onset of album-opener “Bisontennial” and for the “Who Are You?” flavored intro of album-closer “Black Sandwich” adds depth to an already solid album. Fans of Karp or contemporary stoner-metal acts such as Demonaut or Curse the Son should check this out.