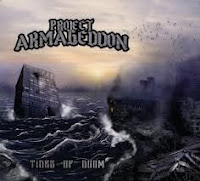 The sluggish, melancholic plod of traditional doom coupled with a trace of NWOBHM virtuosity—both vocally and instrumentally—is the type of metal that Project Armageddon peddles to the masses. With ‘Tides of Doom’,the Houston, Texas three-piece deftly navigates their way through waters both stagnant and rapid resulting in an album that blends the best of lumbering doom riffs with a variety of tempo changes that are delivered with the precision of a tight-knit, hard-rock trio. Beyond the excellent musicianship of the individual players, the vocals of “Doomstress” Alexis are particularly noteworthy and often come across as an odd, yet compelling blend between Bobby Liebling and Geddy Lee. The end result is an album that is completely engaging from start to finish.

A thick, groovy bass line initiates album opener “Into the Sun” before Alexis’s delay-laden bellow kicks the song into overdrive. “Into the Sun” is an upbeat rocker that burns from hot to hotter courtesy of the stellar drumming of Raymond Matthews whose timing propels the song forward through its myriad twists and turns. This first track includes some thrashier moments before a single gong crash slows things down. “Call to Piety’, the first of three instrumentals, is a hypnotic, Mediterranean-flavored dirge that could be the soundtrack for an arduous pilgrimage before it segues into the appropriately titled “Sanctimonious”. This third track lays the doom and gloom on thick as “Doomstress” Alexis lambastes the hypocrisy that has existed among religious zealots through the ages. Despite beginning at a snail’s pace, the song eventually takes off and again features some great drum playing and a blistering solo from guitarist Brandon Johnson before reverting back to a crawl. The first half of the album closes out with another instrumental, “Conflict”.This instrumental is a driving, straight-forward militant stomp that is unrelenting.
The second half of the album opens with the standout title-track “Tides of Doom”. Winding, serpentine lead guitar, gong crashes, and a thundering bass line open the track before Project Armageddon slithers into a classic sounding Sabbathian groove. “Tides of Doom” really highlights the musicianship of all three players and Alexis’s bass playing is particularly mesmerizing in the latter half of the song. “Upon Solace’s Shores”, the third and final instrumental, is really centered on the band’s rhythm section and is similar, in a way, to the previous instrumentals in that it conveys an atmosphere of exoticism. “Fallow Fields”, the longest track with a runtime near ten minutes, opens with a rising, steady squall of feedback and a bouncing bass line before settling into a mid paced groove. While “Fallow Fields” isn’t as initially captivating as the other vocally driven tracks on the album it does pick up by launching into a galloping rhythm that is accented by some fantastic lead guitar playing. Whereas “Tides of Doom” had Project Armageddon proudly wearing their Black Sabbath influences on their sleeves, “Fallow Fields” ends up with subtle Pentagram flavored moments. An ominous organ intro adds variety and depth to ‘Tides of Doom” as it announces the final track, “Paths of Darkness”. “Paths of Darkness” is easily the moodiest track of the album and also injects a fair share of stoner psychedelia into the mix, particularly during the serene, gentler instrumental moments of the song.
With their sophomore release, ‘Tides of Doom”, Project Armageddon has stepped up their songwriting and surpassed the achievement that was their debut album, ‘Departure’. As a whole, ‘Tides of Doom’ is a huge step up from ‘Departure’, but the band will be hard pressed to record a stand-out track as engrossing or indelible as “Psyko-Sonic”. Traditional doom fans with a penchant for Black Sabbath, Pentagram, or even Cirith Ungol who have a taste for expansive songwriting will find many redeeming qualities in Project Armageddon—a great band that deserves more exposure.