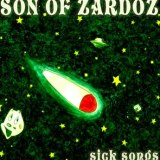 Finally they've done it ! After many months of humming and howing, written under the name of Frères Sludge, recorded as Zardoz and finally released as Son Of Zardoz, "Sick Songs" the debut EP of this young parisian band just came out with 6 songs of an untipycal and unsettling Stoner/Sludge, which is, let's say it without any roundabout, pretty much influenced by The Melvins.

From the first seconds of the intro, it's clear that we've got here a very rehearsal-like sound, limited in terms of thickness, the guitar especially lacks of power and heaviness which is a pity because basically the structures of most songs are pretty straight and catchy.
This problem is not too disturbing on their old anthemic song "I Love Snuff" or the amazingly burning "Western Spaghetti", those both being righteously fuzzy and more depth... Slow and crunchy, they include the best vocal moments with a warmer, more heartfelt lyrical expression.
Despite the titles mentioned, you've got to know that S.o.Z. are singing in french which in my opinion should be a distinctive force and it's partly the case here in fact but, as the overall (at various degrees)  they sometimes lack of  massiveness, like some kind of more aggressive pulse would be needed.
A song like "Bûcheron Rock" puts the band more into a more traditional guitar-based rock and then the problem of sound is more serious, plus like on "Gengis Kahn pt2" the vocals are a bit hard to get into but that's maybe due to the combination of  strange lyrics with a harsh tone that to my ears doesn't sound always right.
The introductive "Gengis Kahn pt1" is a nice crawl in spooky darkness and the closer "A Deux Doigts du Boom" ends with the doomier and heavier moments of the EP after the highlight "I Love Snuff".
I think the band has something to offer in another gloomy niche of the Stoner genre with some cool hints of spooky sludge but Son Of Zardoz tone should be louder, even if of course playing loud is not an end in itself, the moods are conducive for this.
This is a 1st recording with some good promises but also what I hope to be (simply) youth mistakes (some people could include the choice of the cover of "Sick Songs" in them ! and I can not help but think that the guys should have invest a few bux in the production work) but they certainly have already learnt much of it and will gain in maturity and consistency in the near future.
Meanwhile, enjoy this fresh EP and give a like to their fb page like Dave Sherman and Lord Chritus already did !!!