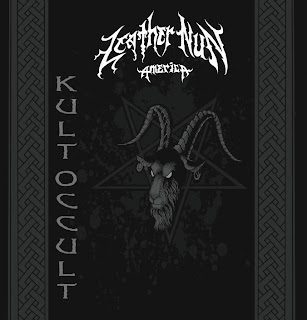 After the great and remarked "absence of light" three years ago, here's  "kult occult" the new album by LEATHER NUN AMERICA, one of the hotest power trio of the planet ! This is more than ever old-school riffing typed, a raw and immediate blend of old Saint Vitus, The Obsessed, Goatsnake, Karma To Burn or even Motörhead. On this 9 songs album, released last week on Psychedoomelic, these guys prove again their most essential caracter : authenticity ... The music and the general attitude remain underground and luckily not meant at all to change ! Guys that aren't afraid to put balls and guts on the table,  in a sticky ambiance, smelling oil and whiskey under a crushing heat !                                                                    This is always a tasty mix of  Stoner, Doom and Rock'n Roll, characterized by groove and massive heaviness; but what's maybe new, welcome and well executed  is a developed sensibility, through more nice harmonies and melodies, especially in  accoustic structures that could sometimes remind Wino's "adrift", this gives air and brightness  to the overall, more varied than previously.
"murderrkult", "warhorse" and "sacrosanct" could be the highlights of the album but there's no real downtime in this solid piece of rockin' doom. Not so many bands can transmit such feelings of identification,  a kind of  communicative (exciting but somewhat painful, skinned alive - too) welfare; so, yes, more than ever, listening LEATHER NUN AMERICA  gives a feeling of wild freedom and that's just fuckin good !