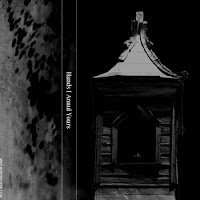 Hands I Annul Yours is a two-piece instrumental band from Minnesota (at least this was recorded there and that's about the only infos you get from them on the net !) whose 1st EP has been recently released on TAPE format through Major Destroyer Rds.

This 2 songs affair is also available digitally and I would say that's a fuckin' good thing cause we've got here a short but lethal dose of primitive Sludge of the highest order and it would be a shame that just one hundred of guys (number of -red- tapes edited) could enjoy this mysterious gem !

This is definitely how I like and consider Sludge at its best : slow, filthy, downtuned to the max and insidiously brutal (2nd song 'Grind Humanity' most especially) ! And again this duo formula with crashing drums and  mammothian riffage is a crushing winner, supported by feedback noise and creepy samples, not forgetting a sligth misanthropic atmosphere.

Damn shit, just 10 minutes is a bit frustrating and definitely too short but this is highly recommended ! More stuff from those maniacs, entitled 'Hell Crane', coming soon on that same label (watch out for other releases from them including the drone band Blut), can't wait :)