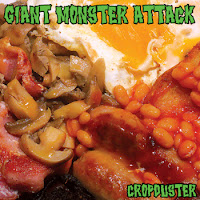 Despite a strange (caloric !) cover that would be in my opinion more conducive to the grindcore genre (including the typography), we've got here - after Bacchus Baracus this week - another band from Scotland (Edinburgh)...

Playing in the Stoner/Sludge category, the band has a very rough and obscure sound  which reminds seriously some Melvins work.

Most of the songs go from slow to mid-tempos pace with occasional breaks in speed,  while a couple of ones are seriously gnarly and punkish with frenzy drums and punching bass-lines.
Riffs are simple, downtuned and often menacing, keeping almost constant that same feeling of weird and sick general mood  which the godfathers of sludge have invented in the late 80's. Vocals are not meant to be  sexy, whiskey-soaked or weed-fueled but they are heartly cryptic, guitars are not meant to be melodic but rather insidious and discordant... again, this would certainly need in the future some more personal development and a thicker production too, but is to my ears very well-crafted and has that something viscerally sick which can make the difference with the too usual Sabbathian type of riffage you find on the net everyday.

I don't hear any weak songs or fillers here, sure the album could have provided a couple of more memorable ones but with 'Insect Messiah', 'D Tune', 'Malcom McDowell' (what a sinister winner !) and 'Bolt Rocket', Giant Monster Attack have already some solid pieces to their credit which make this debut worth discovering; now forget that cover and go listen it !