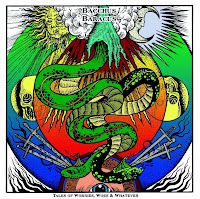 One must admit that if we try to connect geography and statistics, the UK scene is and has ever been one of the most productive on earth, but if we give a look at it more precisely, we can easily notice that the biggest part of it is English... no injure to anyone, but there's rarely occasions to distinct proudly a band's name and say "fuck man, they're not English, they're Scottish/Welsh/Northern Irish !!! " ... This debut album from Glasgow (Scotland) based BACCHUS BARACUS could be that piece of slab you -scottish- would proudly go in a fight for , if you had to vote for your UK album of the month/year/life in your local pub !!!

"Stoner à la Clutch under steroids" (or something close) can you read here and there, well honestly I doubt that's a discerning point of view and this can't be helpful for the band anyway... I prefer the band's description, even if maybe cliche, delivering a classic but effective programm to your senses "Heavy Rockin', drinkin', smokin' never ending party..."

1st noticeable point is the very different type of cover, where the "Growler" Ep cover was (again) a cliche picture (exciting female legs), this 'Tales of Worries, Woes and Whatever" looks far more refined and mystico-psychedelic. This rule can - more than once- exactly be applied in its 1st part to the music on this 8 songs affair, understand more refined... for the 2nd part of it, more psychedelic, well, not as significantly even if globally the overall tempo has slowed-down, plus lets also place to quieter moments and most especially there's the closer 'Sweet Smell" which is an opened door towards psychedelic soundscapes and by far the longest song the band has ever composed so far, a kind of trippy journey into space rock, ending into a catchy soar of melodies.

One thing that can not be missed from the first notes of the opener 'Yo Wanna Deal' is the powerful production, authentically organic, it perfectly serves the groovy and punchy rock'n roll the band display. This up-tempo song tightly draws the portrait of the band's burning origins, an authentic winner as opening song or encore for live considerations, perfect for stomping, shouting and headbanging !
'Memo' follows up with a massive groovy mid-tempo; in those dynamics, vocals by Quzzy have a very good flow in  rythmical harmony with the music, his raspy tone give a sleazy 70's touch that fits so well with the heavy rockin' grooviness of the guitar... This is nothing highly technical, nor original, this is simply tightly played, catchy and kinda unifying, you know the kind of feelings like when you listen a classic from ZZ TOP or AC/DC.
The pace is more significantly slowed-down on 'Man of the North', almost melancholic with layered melodies or on the gloomiest song 'Love is a Prison' with its fuzzy bass, ominous riffage and infectious melody that makes your ride snaky.
'Mammoth' comes back to more commanding vocals and harsh tone, still with a sleazy work on the guitar-vocals connection, this is again another great song that will gather metalheads and dirty r'n'r  afficionados.
While not being soulless or boring, 'No Name' is clearly not the most memorable song of the band but it's soon followed by the doomiest song of the album that is the excellent 'Fuck Knows Man'. A plodding moment with dark vocal tones, before the already mentioned closer which is really experimentative and could give different perspectives to the band's future sound.

More mature than on the debut ep, with a massive and warm sound, oscillating subtly between thunderous, groove-laden and spaced-out stuff, Bacchus Baracus released here cohesively a solid album of  tasty Heavy Rock'n roll... Believe me this band deserves your attention and it would be a shame for you to miss this "Tales of Worries, Woes &Whatever" to just concentrate on the biggest/sexiest names of the genre; Scotland can be proud to count on Bacchus Baracus... !


listen here 'Memo' premiered a few days ago on The Soda Shop !