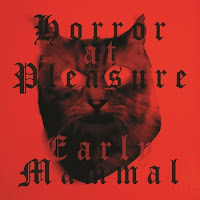 Whereas their label mates Brujas Del Sol drift out into space, Londoners Early Mammal stay in their garage and interpret the psychedelic sound of the Sixties with fuzzy heaviness as well as rather condensed songwriting, the successful epic "Ressurection Men" being the exception from this rule.

After a short instrumental introduction ("Left Hand" and "Uncle Scary's Right Hand" forming a bracket around the other eight tracks), "Final Witch" turns out to be a fitting opener to captivate the listener. Grounded on a graspable lick, the guitar playing gets busier and busier as we witness frontman Rob Herian working towards an inevitable climax, a recipe the group applies again later on in "Checking The Bullshiter's Queen". His singing, particularly during the succeeding "Demon Or Saint", makes Roky Erickson and Tom Waits come to mind, while the raw and trebly production may not be for everybody either. Early Mammal are clearly not on the poppy side of things, although they do know how to soothe the listener if you take the moody interludes "Coming Back" and "Going Out" as a yardstick.

In between, "To Find Me Gone" is lo-fi in the truest sense of the word, temporarily stomping and more hinting towards a definite beauty behind the hissing and scratching than to shove the bloss down your throats. You have to work, preferably with headphones, in order to get the gist out of this band, and to bait you into doing this, Early Mammal add "Money Shot" to the mix, the simplest amongst the songs and kind of a nasty take on the Rolling Stones' earliest efforts. In its entirety, "Horror At Pleasure" is a rare case of carrot-and-stick-policy set to music, ideal fodder for those who like non-academic Rock that nevertheless needs some (drugged?) brains on the listener's side to unfold its full potential. The devil lies in the details, as they say ...